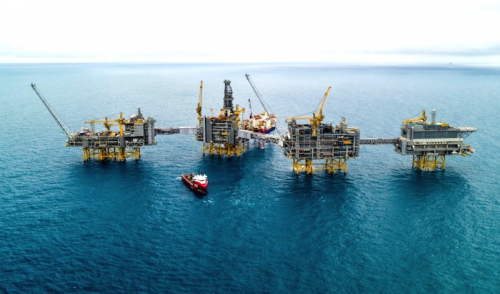 A massive oil field in the North Sea, 87 miles (140km) west of Stavanger has come on stream two months ahead of schedule and well below the original budget for its development and operation.

The partnership behind the development has been led by Equinor and includes Lundin Norway, Petoro, Aker BP and Total.

“At peak, it will account for one third of all oil production in Norway and deliver it with record low emissions.”

Powered by electricity from shore, the field has record-low CO2 emissions of below 1 kg per barrel.

“We have made some courageous decisions with new technology and digitalization that we’re benefiting from today,” says Anders Opedal, executive vice president for technology, projects & drilling at Equinor.

“The new installation technology used in this project has reduced safety risk, saved more than two million offshore hours, and shaved months of the development schedule.

“We have also invested in digital solutions to boost oil recovery, optimize production and improve field operations – and these new ways of working have already saved at least one month in the execution stage.”

The Johan Sverdrup field is being developed in two phases.

Phase II was approved by Norwegian authorities in May 2019 with production start-up expected in Q4 2022.

Tweet
More in this category: « Wave energy device 'could be used to power subsea equipment' Norway reveals ambitious action plan for future of Green Shipping »
back to top