Miniature transponders to be used in fight against ‘ghost nets’ 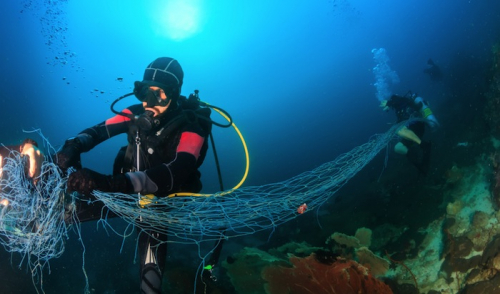 Lost fishing gear – known as ghost nets – continues to be a major threat to life in the oceans. It chokes coral reefs, damages marine habitats and entangles fish, marine mammals and seabirds.

They also contribute significantly to marine plastic pollution as they slowly disintegrate, releasing microplastics into the sea.

Often lost during storms or in strong currents, ghost nets can travel long distances and can continue to kill fish for many years afterwards.

Now though, a new project – NetTag – has been set up to try to reduce and prevent marine litter by developing new technology for the location and recovery of lost fishing gear based on miniature transponders – acoustic devices that pick up and automatically respond to an incoming signal.

Leading the initiative is Newcastle University, in the north east of England, which has a strong track record in developing underwater communication and tracking technology.

“By attaching miniature, low-cost, subsea acoustic transponders to fishing nets or other gear, the aim is to be able to precisely locate lost gear from a search vessel and then investigate how underwater robots may be used to aid recovery where necessary,” explains Jeff Neasham, a senior lecturer in the School of Engineering at Newcastle University.

“A unit on board the surface vessel will send out interrogation signals and any tagged gear within a range of 3km will send a reply from which it may be located.

“Recent developments by our team have delivered technology that is cheap enough to be viable for this application and low enough in energy consumption to allow small battery powered devices to be located many months after they are lost.

“We want to achieve a win-win scenario where modest investment by fishermen can be more than paid back, by avoiding the loss of valuable assets, while also significantly reducing a major source of plastic pollution in the marine environment.”

Radio waves cannot penetrate water which is why communication and tracking below the sea is carried out via acoustic waves.

Underwater acoustic transponders and modems have historically been large and expensive which has limited their use mainly to high value applications, for example in the oil and gas industry.

Furthermore, many devices emit high power in transmission (up to 100W), which has environmental implications for large scale use, or consume significant power when listening which requires large battery packs for long deployment.

Newcastle University’s recent research has focused on miniature devices, around the size of a matchbox, which could be manufactured for less than £50, and transmitting less than 1W of power using signals designed to minimise impact on marine life.