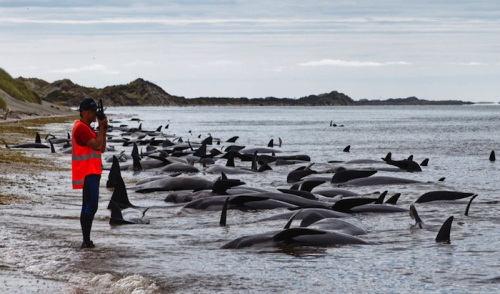 The study, published this week in the journal PLoS ONE by scientists from British Antarctic Survey and four Chilean marine institutes, could revolutionise how stranded whales – which are dead in the water or beached – are detected in extremely remote locations.

In 2015, over 340 baleen whales were involved in a mass stranding in a remote region of Chilean Patagonia.

The stranding was not discovered for several weeks due to the remoteness of the region.

Aerial and boat surveys assessed the extent of the mortality, but only several months after discovery.

The new research studied satellite images covering thousands of kilometres of coastline, which provided a clearer insight into the extent of the mortality.

They could identify the shape, size and colour of the whales, especially when the animals turned pink and orange as they decomposed.

“As this new technology develops, we hope it will become a useful tool for obtaining real-time information, and allow local authorities to intervene earlier to possibly help with conservation efforts.”