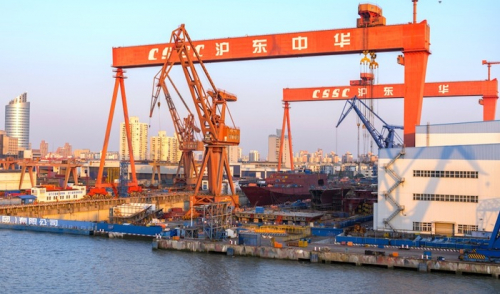 Beijing has announced that it is to merge China’s two largest state-owned shipyards, according to a report on an official Chinese government website.

The move will bring together the China State Shipbuilding Corp (CSSC) and China Shipbuilding Industry Co (CSIC) – enabling China to establish a shipbuilding giant with a combined revenue up to 1 trillion yuan (US$141.5 billion).

CSSC is currently the world’s second largest shipbuilder, behind South Korea's Hyundai Heavy Industries, whilst CSIC is the third largest in the world.

The two companies were part of the same group until 1999 when they were split into two separate entities.

CSSC and CSIC have both been building an increasing number of military vessels in recent years as the Chinese navy seeks to rapidly modernise and expand.

The most notable vessels include Type 055 destroyers, Type 075 amphibious assault ships, and Type 094A nuclear submarines.

"China needs to build more giant vessels to help ship in oil and gas from other countries,”

Tweet
More in this category: « Offshore wind will provide global electricity ‘several times over’ ABB to develop autonomous tugs for Port of Singapore »
back to top