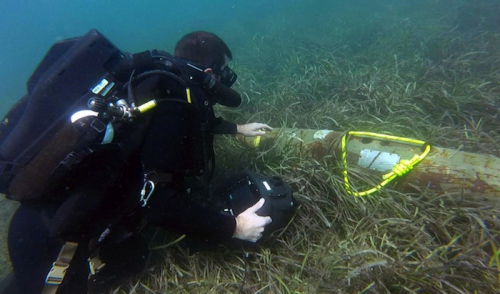 Defusing deadly mines is challenging enough, but Royal Navy divers faced extra threats posed by venomous snakes, poisonous octopuses and sharks when they recently flew half way around the world to train in Australia.

Eighteen experts from Fleet Diving Unit 2 – the UK’s specialists in finding and neutralising mines and bombs in shallow waters – joined counterparts from Canada, New Zealand and the USA at Garden Island in western Australia.

The divers were all invited to attend a three-week test of the latest equipment and techniques in the waters around the island, which lies just off the west coast near Perth.

The theme of Exercise Dugong 19 was to clear a safe route for an amphibious task group to reach shore using a mix of remote-controlled and autonomous underwater vehicles as well as the divers themselves.

Dugong 19 provided a chance to maintain and develop wartime diving skills in a challenging environment.

In addition to the mines, the Australian environment presented some unique challenges for the visiting diving units as the waters around Garden Island are home to large populations of venomous tiger snakes and great white sharks.

On top of that, the shape of the mines laid in the water by the exercise organisers attracted the attention of local blue-ringed octopuses whose venom can paralyse and then kill a human being.

Every diver received a brief from their hosts on how to remain safe.

“The shallow water explosives community is a small yet specialist group of people, so it's important to conduct exercises to strengthen the bonds between participating nations,” said FDU2’s commanding officer Lieutenant Commander Keith Mabbott.

“These divers could be working together in the future on operations, so it’s vital they understand how to operate together effectively and efficiently.

“Dugong 19 provided us all with a chance to maintain and develop our wartime diving skills in a difficult environment, alongside the people we would be operating with.”

Tweet
More in this category: « IMO commits to further ‘firm action’ on gender equality Shipping firms team up to test onboard carbon capture system »
back to top