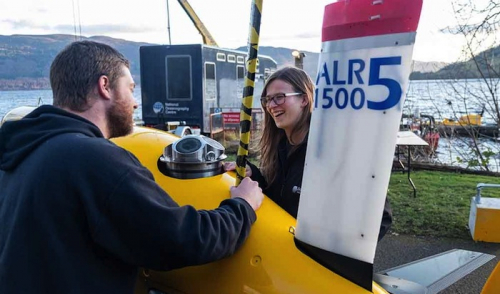 The two-year £1.4m project set out to integrate existing and emerging technologies to deliver a step-change in unmanned platform endurance and navigational precision.

The final trials – which saw one of the NOC’s largest deployment of AUVs operating in swarms – were completed in Loch Ness, Scotland.

“Sending autonomous and unmanned underwater vehicles (AUV/UUVs) out on missions that will last for weeks or even months, unaided by crewed ships, is a shared vision held by the ocean science, offshore energy and defence sectors,” says Geraint West, Sonardyne’s business manager for ocean science.

“But, current constraints on AUV or UUV operations – such as onboard battery capacity and navigational accuracy degradation over time – has meant that the role these vehicles has been restricted to relatively short deployments.

“As the only company that produces an all-in-one hybrid acoustic-inertial-Doppler navigation and communication solution for AUVs and USVs, we were uniquely placed to collaborate with the NOC to realise the ambitious aims of this project.

“We've proven that we can autonomously calibrate networks of seafloor positioning transponders to make offshore survey and construction operations faster and easier.”

Using autonomous calibration techniques will remove the need for a manned vessel to perform this task – removing people from harm’s way, driving down fuel emissions, and improving efficiencies.

“Combining all of these capabilities will bring about a step-change in AUV operations – providing a disruptive capability in the marine autonomy space,” says Matt Kingsland of NOC.