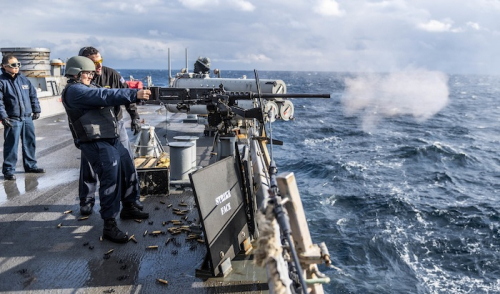 Experts in naval operations and maritime law gathered at the US Naval War College, in Newport, Rhode Island, in December to discuss an upcoming revision to the San Remo Manual – the principal legal document regarding armed conflicts at sea.

The San Remo Manual on International Law Applicable to Armed Conflicts at Sea was adopted in June 1994 by the International Institute of Humanitarian Law after a series of discussions held between 1988 and 1994 by diplomats and naval and legal experts.

The document integrates and codifies international legal standards for naval conflict with the Geneva Convention.

“The San Remo Manual is one of the most respected compilations of the law of naval warfare – and we are proud to be engaging in exploratory discussions to update it,” Rear Admiral Shoshana S. Chatfield, Naval War College president, told the group in her welcome address.

“Rapid advancements in naval technology and the ways in which modern navies fight warrant a close review of the manual to ensure it remains as accurate and relevant as it was when originally published 25 years ago,” she said.

In 1994, the San Remo Manual was a contemporary restatement of international law regarding armed conflicts at sea, and the first major document of its kind since 1913.

Now, work is beginning to revise the manual with an eye towards the modern nature of naval warfare.

The group of international experts is expected to meet several times over the next two years to completer their official deliberations.

James Kraska of the US Navy’s Center for International Law says advancements in unmanned, autonomous and other warfare techniques have changed how navies act, and the law needs to respond.

"We have to ensure the San Remo Manual remains relevant to today's navies as they prepare to deter or, if necessary, win naval conflict at sea," he adds.

Tom Culora, dean of the college’s Center for Naval Warfare Studies, is a retired US Navy aviator who commanded the amphibious assault ship USS Boxer.

Culora told the attendees that, in his experience, the issues being discussed are vitally important.

“As a former consumer of the San Reno Manual, I know how important that is for the naval crews,” he said.

“And while the document itself is incredibly critical, I think the dialogue that will happen over the next two years will be equally as critical.

“It peels back the foundations of why different nations feel the way they do, and what they think about these issues.”

The group of experts will begin their official deliberations in Australia in June, before meeting again in Denmark in October.

Tweet
More in this category: « Autonomous ferry firm created by marine technologists Marine mammals under increased threat from 'ship strike' »
back to top