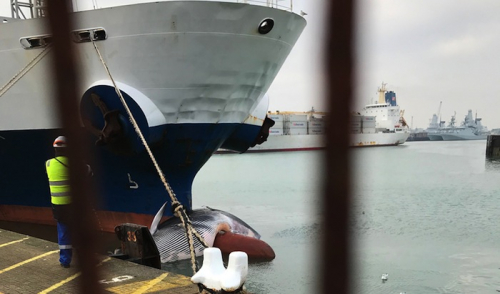 A marine wildlife charity has warned of rising numbers of ‘ship strikes’ after a young whale was found dead on the bow of a cargo ship.

The animal's body was noticed draped across the bulbous bow of the Cote D'Ivorian Star, which was transporting tropical fruit from Senegal to the UK, as the ship approached Portsmouth.

The Cetacean Strandings Investigation Programme (CSIP) carried out a field post-mortem, which found that the animal was a 17m juvenile fin whale “in good nutritional condition”.

The examination concluded that ship strike was the most likely cause of death, and that it was likely the animal had been struck while it was still alive.

Marine wildlife charity ORCA says the number of whales struck by ships has increased significantly in recent years – due to a rise in maritime traffic, vessel speed and engine power.

"That is why we have started working with the University of Portsmouth and Brittany Ferries to better understand how we can prevent tragic incidents like this occurring in the future.

“We hope the evidence we gather will lead to protocols and training for all ship crews, wherever they operate in the world.”

The deceased fin whale was removed from the ship by Portsmouth Harbour authorities, who lifted it off using a crane before transporting it to a facility in Essex.

“This was a very sad incident – sad for the whale, and sad for the people working in the port and on the ship,” says Ben McInnes, Portsmouth International Port's harbour master.

“As a seafarer myself, one of the privileges of working at sea is seeing some amazing wildlife and working amongst it.

“We worked with several agencies to remove the whale and dispose of it in a safe, responsible and respectful manner.”