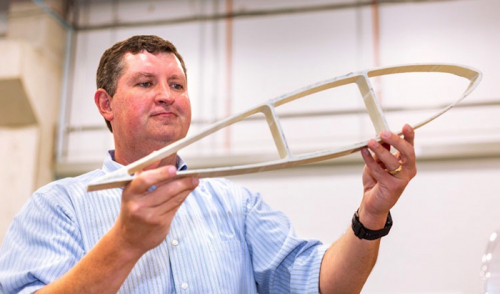 An associate professor of mechanical engineering at the University of Texas – who has spent years working on a unique offshore turbine design – has won a multi-million dollar grant from the US government to develop his idea.

The $3.3m award from the Department of Energy’s Advanced Research Projects Agency-Energy (ARPA-E) will support Dr. Todd Griffith and his research team as they design and build a working prototype.

The grant is part of a $26m ARPA-E funding initiative for 13 projects to accelerate floating offshore wind turbine technologies through the Aerodynamic Turbines, Lighter and Afloat, with Nautical Technologies and Integrated Servo-Control (ATLANTIS) program.

The Department of Energy estimates that state and federal waters along the US coasts and Great Lakes could generate twice the amount of energy produced by all of the nation’s electric power plants combined.

However, one of the biggest barriers to harvesting that energy has been the high cost of deploying wind turbines in deeper water.

Griffith’s project aims to lower the cost and overcome challenges with installation and connecting to existing energy grids with underwater cables.

“A traditional turbine design is great for land, and it can make sense offshore in shallow waters,” says Griffith, “but when you build in deep water in the ocean, you need a totally new design.”

Called a vertical axis wind turbine, it has vertical blades and axis of rotation, rather than horizontal, and looks more like an upended eggbeater than a pinwheel.

The platform – which is smaller than traditional platforms – sits partly above the ocean’s surface and partly below, much like a ship.

The generator and controls are on the platform, providing greater stability and facilitating easier maintenance.

The turbine blades would rise up to 900ft above the surface of the ocean, but wouldn't obstruct any ocean views as they would be sited at least 20 miles offshore, beyond the horizon.

“This is an incredible opportunity to do great research with a great multidisciplinary engineering team,” says Griffith.

“It’s a true systems-level engineering problem, and I’m just excited to be able to lead this incredible group to bring all this technology together to realize the vision of the ATLANTIS program.”