Royal Navy to begin unmanned mine hunting and surveying ops 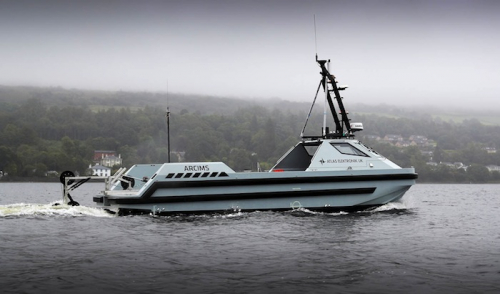 Unmanned mine hunters and survey technology will soon be on front-line duties with the Royal Navy.

Specialist autonomous kit has now been handed over into military service and will be on live operations from March.

Sailors trained in this of type mission will be stationed at HMNB Clyde, from where the remotely operated kit – including submersibles and boats designed to hunt down mines as well as analyse the ocean floor – will be deployed.

“This exciting project handover is a real step forward in realising our ambition to make mine hunting safer and more effective through the use of autonomous and robotic technology,” says Commodore Mike Knott, Assistant Chief of Staff Maritime Capability.

“With equipment and personnel now operating from Clyde, the transition to widespread use of autonomous systems in mine counter measures (MCM) is becoming a reality and places the Royal Navy MCM community at the cutting edge.”

Initial operations are now being carried out by Project Wilton, the name for the Royal Navy’s unmanned mine hunting and survey endeavours.

This kit will supplement the Royal Navy’s current mine hunting missions carried out by the mine countermeasures ships of the Hunt and Sandown classes.

The work builds on the ongoing trials of unmanned and autonomous technology carried out by the Royal Navy and Defence Science and Technology Laboratory.