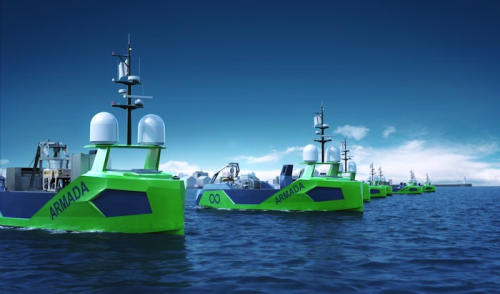 The ships will be capable of remotely deploying a wide range of sensors, as well as AUVs and ROVs, for visual and acoustic data acquisition.

The company says the robot ships will be able to serve a wide range of industry sectors by being fully equipped to perform a multiplicity of offshore data acquisition and intervention operations to depths of 6,000m.

The fleet will require no humans on board, nor any host vessels nearby, in order to operate.

Instead the robot ships will be controlled by experienced mariners via satellite communications from state-of-the-art onshore facilities in Austin, Texas, and Southampton in the UK.

Ocean Infinity predicts that its new fleet will produce 90% less CO2 than other conventional survey vessels.

The robot ships are currently under construction, and are scheduled to be operational by the end of this year.