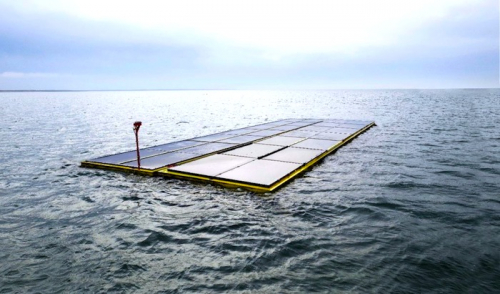 The company reports that the platform has survived a number of winter storms which have battered it with five-metre high waves and winds of up to 70 knots.

The first 8.5 kW of the modular system – known as Zon op Zee (Solar at Sea) – is now operational and over the coming months it will be expanded into a larger scale 50 kW pilot.

“The first offshore solar system for open seas in the world is now a reality,” says Allard van Hoeken, CEO of Oceans of Energy.

“Clean energy generation without using areas of land is needed all around the globe – right now and into the future,”

According to van Hoeken, offshore solar generation offers a number of advantages over offshore wind farms.

"Floating modular platforms have the potential to create five times more energy than wind turbines for the same area of sea surface used," he says.

"They will also be beneficial to the fishing industry because they create protective habitats for juvenile fish and facilitate the growth of mussels and seaweed.

“Our aim is to expand to 1 MW by the end of this year, and we hope to eventually grow the installations up to 100 MW – perhaps even more.”