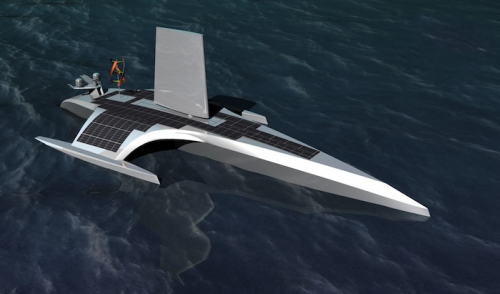 IBM and marine research organization Promare, have announced that a new 'AI Captain' – which will enable the Mayflower Autonomous Ship (MAS) to self-navigate across the Atlantic later this year – is to go to sea this month for testing.

The trial, which will take place on a manned research vessel off the coast of Plymouth in the UK, will evaluate how the AI Captain uses cameras, AI and edge computing systems to safely navigate around ships, buoys and other ocean hazards.

MAS will trace the route of the original 1620 Mayflower to commemorate the 400th anniversary of the famous voyage.

Sailing from Plymouth, UK to Plymouth, Massachusetts with no human captain or onboard crew, it will become one of the first full-sized, fully autonomous vessels to cross the Atlantic.

"While the autonomous shipping market is set to grow from $90bn today to over $130bn by 2030, many of today's autonomous ships are really just automated – robots that don't dynamically adapt to new situations and rely heavily on operator override," says Don Scott, chief technical officer of the Mayflower Autonomous Ship project.

"Using an integrated set of IBM's AI, cloud, and edge technologies, we are aiming to give MAS the ability to operate independently in some of the most challenging circumstances on the planet."

MAS will rely on IBM's advanced AI and edge computing systems to sense, think and make decisions at sea, with no human intervention.

With the three hulls of the trimaran MAS currently reaching the final phase of construction in Poland, a prototype of the AI Captain will first take to the water on a manned vessel – Plymouth Quest – a research ship owned and operated by the Plymouth Marine Laboratory in the UK.

As well as following the overall mission objectives to reach Plymouth, Massachusetts in the shortest amount of time, the AI Captain will draw on IBM's rule management system (Operational Decision Manager (ODM) to follow the International Regulations for Preventing Collisions at Sea (COLREGs) as well as recommendations from the International Convention for the Safety of Life at Sea (SOLAS).

Used widely across the financial services industry, ODM is particularly suited to the MAS project as it provides a completely transparent record of its decision-making process – avoiding 'black box' scenarios.