No increase in ocean biodiversity for 'hundreds of millions of years' 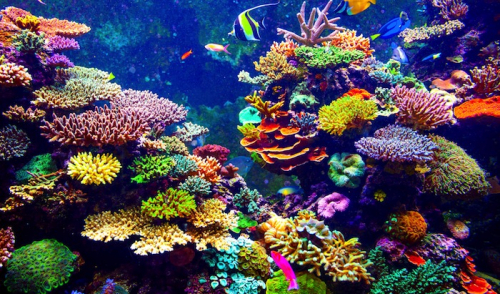 A new way of looking at marine evolution over the past 540 million years has shown that levels of biodiversity in our oceans have remained fairly constant, rather than increasing continuously over the last 200 million years, as scientists previously thought.

A team led by researchers from the School of Geography, Earth and Environmental Sciences at the University of Birmingham in the UK used a big data approach to study this question, which has been disputed by palaeobiologists in recent years.

Using fossil data collected over the past two centuries, and compiled by hundreds of researchers in the Paleobiology Database over the last 20 years, the team have been able to show regional-scale patterns of diversity across geological time from the so-called Cambrian Explosion – the point at which most major groups of animals started to appear in the fossil record – to the present day.

The results were published this week in the peer-reviewed academic journal Science.

“Studies of marine animal diversity over the last 500 million years have historically focussed on estimating how ‘global’ diversity changed through time,” explains Dr Roger Close, who led the research.

“The problem is that the fossil record is not really global, because both the amount and the parts of the world that are actually preserved in the fossil record changes so much through geological time – this means that so-called ‘global’ diversity curves are misleading.

“To get around this problem, we studied diversity at regional spatial scales, which meant we could focus on places and times that are well known in the fossil record.

“By comparing geographic regions that were similar in size, we could show how marine animal diversity varied across both time and space.”

Using these estimates for specific geographic regions, the team were also able to estimate the influence of other environmental factors, such as coral reef systems.

At this more localised level, it’s possible to see significant variations in diversity across the globe within time intervals, perhaps in response to environmental differences.

“We think of reefs today as being hotspots of diversity, responsible for housing a disproportionate amount of animal species,” says Dr Close. “So in areas where there are a higher proportion of reefs, diversity will inevitably be higher.

“These studies concluded that marine animal biodiversity had increased steadily over the last 200 million years, culminating in modern levels that were greater than any point in Earth’s history. In contrast, our work suggests that modern levels of biodiversity – at least at the regional scales we studied – are not exceptional.”

Interestingly, the researchers did observe one point in the fossil record where there was a step change in diversity.

The team found this evidence at the end of the Cretaceous period, when dinosaurs became extinct.

“Not long after this devastating mass extinction, we see a distinct shift towards greater regional diversity,” says Dr Close.

“This probably had something to do with ecological reorganisation after many species were wiped out.

“In particular, we see a rebound to much higher diversity among gastropods – a huge group of invertebrates that we would recognise as snails and slugs.

“This suggests that such a widespread species loss cleared space for other groups to explode – and gastropods were able to take advantage of this.

“When you look at these individual animal groups, you can see fluctuations in diversity that are often substantial – but taken together, these patterns sum to one of constrained diversity.

“Some groups might benefit from the misfortune of others, but the overall levels of diversity that we see have remained fairly stable for hundreds of millions of years.”

Tweet
More in this category: « BMT launches its next generation hull-form – the ‘Pentamaran’ High-level call to protect mariners and keep trade by sea flowing »
back to top