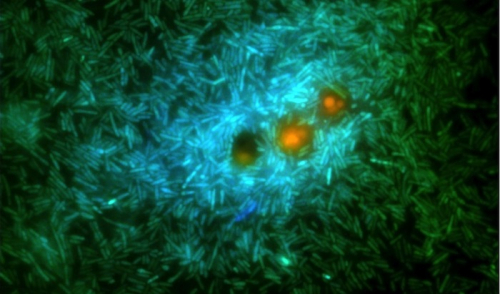 A new study shows that ‘hotspots’ of nutrients surrounding phytoplankton – tiny marine algae producing approximately half of the oxygen we breathe every day – play an outsized role in the release of a gas involved in cloud formation and climate regulation.

The new research – by a team at MIT in Boston, USA – quantifies the way specific marine bacteria process a key chemical called dimethylsulfoniopropionate (DMSP), which is produced in enormous amounts by phytoplankton.

This chemical plays a pivotal role in the way sulphur and carbon get consumed by microorganisms in the ocean and released into the atmosphere.

The findings were published this week in the peer-reviewed journal Nature Communications, in a paper by MIT graduate student Cherry Gao, former MIT professor of civil and environmental engineering Roman Stocker (now a professor at ETH Zurich, in Switzerland), in collaboration with Jean-Baptiste Raina and Professor Justin Seymour of University of Technology Sydney in Australia, and four others.

More than a billion tons of DMSP is produced annually by microorganisms in the oceans, accounting for 10 per cent of the carbon that gets taken up by phytoplankton – a major ‘sink’ for carbon dioxide, without which the greenhouse gas would be building up even faster in the atmosphere.

But exactly how this compound gets processed and how its different chemical pathways figure into global carbon and sulphur cycles had not been well understood until now.

“So given the ubiquity and the abundance of DMSP, we expect that these microbial processes would have a significant role in the global sulphur cycle.”

Gao and her co-workers genetically modified a marine bacterium called Ruegeria pomeroyi, causing it to fluoresce when one of two different pathways for processing DMSP was activated – allowing the relative expression of the processes to be analyzed under a variety of conditions.

One of the two pathways, called demethylation, produces carbon and sulphur based nutrients that the microbes can use to sustain their growth.

The other pathway, called cleavage, produces a gas called dimethylsulfide (DMS), which Gao explains “is the compound that’s responsible for the smell of the sea. I actually smelled the ocean a lot in the lab when I was experimenting.”

DMS is the gas responsible for most of the biologically derived sulphur that enters the atmosphere from the oceans.

Once in the atmosphere, sulphur compounds are a key source of condensation for water molecules, so their concentration in the air affects both rainfall patterns and the overall reflectivity of the atmosphere through cloud generation.

Understanding the process responsible for much of that production could be important in multiple ways for refining climate models.

“Those climate implications are why we're interested in knowing when bacteria decide to use the cleavage pathway versus the demethylation pathway, in order to better understand how much of the important DMS gets produced under what conditions,” Gao says. “This has been an open question for at least two decades.”

The study found that the concentration of DMSP in the vicinity regulates which pathway the bacteria use. Below a certain concentration, demethylation was dominant, but above a level of about 10 micromoles, the cleavage process dominated.

“What was really surprising to us was, upon experimentation with the engineered bacteria, we found that the concentrations of DMSP in which the cleavage pathway dominates is higher than expected — orders of magnitude higher than the average concentration in the ocean,” she says.

That suggests that this process hardly takes place under typical ocean conditions, the researchers concluded.

Rather, microscale ‘hotspots’ of elevated DMSP concentration are probably responsible for a highly disproportionate amount of global DMS production.

These microscale ‘hotspots’ are areas surrounding certain phytoplankton cells where extremely high amounts of DMSP are present at about a thousand times greater than average oceanic concentration.

“We actually did a co-incubation experiment between the engineered bacteria and a DMSP-producing phytoplankton,” Gao says.

“The experiment showed that indeed, bacteria increased their expression of the DMS-producing pathway, closer to the phytoplankton.”

The new analysis should help researchers understand key details of how these microscopic marine organisms, through their collective behaviour, are affecting global-scale biogeochemical and climatic processes.

Tweet
More in this category: « High-level call to protect mariners and keep trade by sea flowing Navy saves life of lost diver who had no buddy 'because of C-19' »
back to top