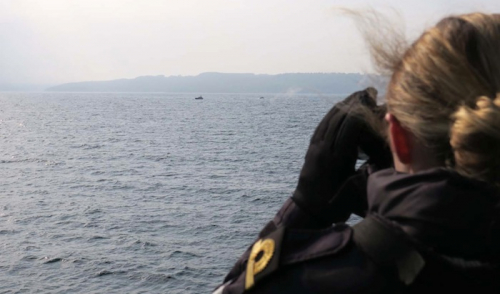 Eagle-eyed sailors from HMS Tyne helped save the life of a diver who was missing and presumed dead off the UK’s South Coast earlier this week.

The Offshore Patrol Vessel responded to a mayday call for the missing diver while on routine maritime security patrols in home waters.

The alert from Her Majesty’s Coastguard saw Tyne assist RNLI lifeboats from Exmouth and Lyme Regis, as well as two Coastguard helicopters, a dive boat and four local fishing vessels.

Tyne arrived in the area in Lyme Bay – four miles off the Dorset coast – within 45 minutes of the alarm being raised.

The warship took up station in the last known position of the diver and sailors were called on to carry out a visual search.

After 20 minutes, Sub Lieutenant Andrew Boyle, a young officer under training on Tyne, spotted the diver.

Tyne then radioed the location through to the Exmouth lifeboat, which was in the best location to recover him.

The diver was found well and taken to safety by the lifeboat.

“This incident is a great example of how versatile the vessels of the Offshore Patrol Squadron are,” says Lieutenant Nick Ward, Executive Officer of HMS Tyne.

“The ship’s company quickly adapted to a changing situation and worked to support the Coastguard, the RNLI, and local mariners in carrying out the search.

“We are always concerned for the safety of our fellow mariners at sea, and thankfully SLt Boyle spotted the diver and we were able to play a key part in recovering him quickly.”

According to the RNLI, the diver was diving without a buddy and had been adrift for two hours in which time he had floated three miles from his last reported location.

He managed to surface safely but lost sight of the dive vessel after his line became detached. He did not require medical attention.

Exmouth RNLI Deputy Coxswain, Roger Jackson, adds, “The diver was very fortunate to have been located safe and well so quickly and, although there was an easterly swell, visibility was good and there were a number of vessels in the locality who came to help in the search.

“We are grateful for the invaluable assistance of our RNLI colleagues from Lyme Regis, the crew of HMS Tyne, Lyme Regis Coastguard Rescue Team, the HM Coastguard helicopter and other vessels in the area that came together in a coordinated effort that led to this successful rescue.

“The diver was very lucky indeed and although I’m very pleased the outcome was good, I would urge everyone to please heed the latest government Coronavirus instructions.”