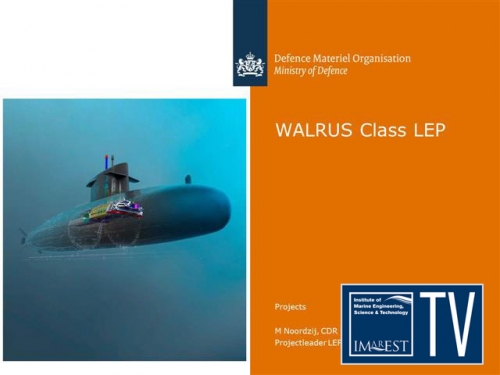 The Walrus class of four submarines came into service 1987-1992. After the end of the cold war their military role changed from blue to brown water, but since they proved to be successful in these new roles it was decided that the boats could and would be operational until 2025-2030 and to carry out a major Life Extension Program (LEP). From 2003 onwards the Walrus Engineering Support Project (WESP) carried out by five members of the Dutch Underwater Knowledge Center (DUKC) in conjunction with DMO resulted in a blueprint for a major upgrade of the existing four boats.

This Upkeep Program Walrus (IPW) is now underway and introduces some new hardware such as the installation of an optronic mast and a Mine & Obstacle Avoidance Sonar, but also embodies new sonar processing equipment, upgrading of the combat management system and a new arrangement of the Control Centre. On the platform side new (static) electric conversion equipment and an upgraded platform control system are included as well.

The first boat will tested at sea during 2016.