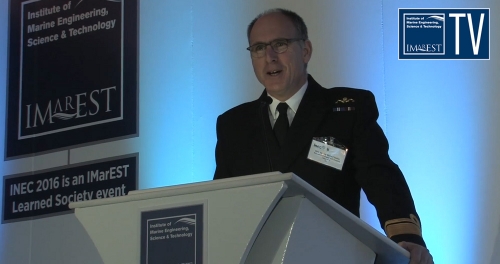 Assistant Chief of Naval Staff (Support) is the 2* Commander for HM Naval Bases Clyde, Devonport and Portsmouth, and the Oil Fuel Depots, and is responsible for providing Engineering Support, Infrastructure and Logistics policy, advice and assurance to the Navy. Based at Navy Headquarters on Whale Island, Portsmouth, Rear Admiral Stokes took up the appointment in April 2015.

Richard Stokes joined the Royal Navy in 1981 and graduated in engineering from the Royal Naval Engineering College, Manadon. He trained as a Submarine Weapon Engineer Officer and had a wide range of submarine, staff and command jobs. Promoted to Captain in 2005, he served in the MOD Equipment Planning directorate; moving to Navy Command in 2008 to manage the careers of the 13,000 officers and ratings in the Royal Navy’s engineering branch, before moving on in 2011 to study at the Royal College of Defence Studies.

Promoted to Commodore in 2011, he spent 10 months as the Programme Director for Royal Navy Defence Reform Implementation - the programme to reduce the Navy’s Non-Front Line manning by 20%, before returning to the MOD in 2012 to take up the post of Head of Nuclear Capabilities. Here he was responsible for planning the future submarine programme, with particular responsibility for delivering the Astute class into Service; steering the Successor SSBN towards its Main Gate investment decision in Spring 2016; and for initiating pre-concept work on the replacement for the Astute Class.