Empowering the Next Generation of Female Leadership in Offshore 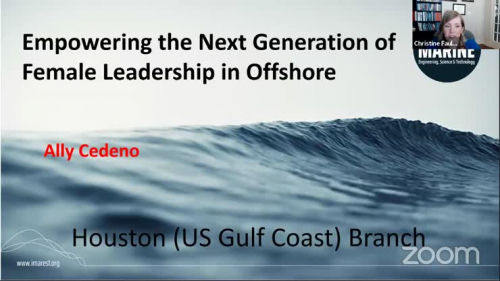 IMarEST TV recording by the IMarEST Houston (US Gulf Coast) Branch on the 23rd June 2020. This webinar was presented by Ally Cedeno, founder and president of the Women Offshore Foundation.

In this 30-minute presentation, Ally sheds light on her career at sea and what motivated her to create Women Offshore. From hardships on the high seas to a crew that supported her, creating Women Offshore was a journey in empowering herself and others.

In an industry where women make up just 2% of the worldwide workforce, Ally Cedeno has made it her mission to empower the next generation of female seafarers, and in turn, reduce the gender gap through the nonprofit organisation, Women Offshore Foundation. In just three years, Women Offshore created a groundswell in the maritime industry that propels the careers of female seafarers through various initiatives, including a mentoring program, called the Mentorship; the Women Offshore Podcast; website resources at WomenOffshore.org; and an annual conference in Houston, Texas.

Ally shares her lessons learned in growing the organisation, from an online presence that started during Women Offshore’s early days as a blog to how one can start and operate a virtual mentoring programme with limited resources. She shares stories from her podcast and its impact on seafarers and engages you with lessons learned on how to empower women at your own organisations to achieve success, while pursuing their own career goals.