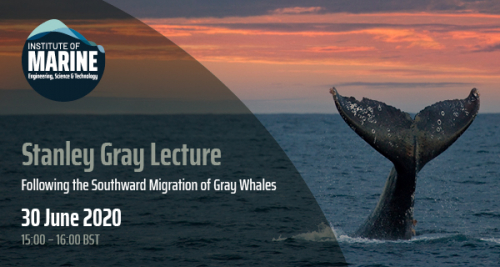 IMarEST TV recording in the Stanley Gray Lecture series - The Gray Whale Cycle and Q&A session, which took place on the 30th June 2020.

The speaker for this webinar is Becci Jewell, winner of the IMarEST David Henderson Inspiring Journey Grant, whho gives an overview of her journey following the migration of gray whales cycle from Alaska to Mexico.

Meeting with scientists along the way, Becci learnt about ongoing studies of the gray whales' biology and behaviour as well as the technology that's helping to answer these questions.

With telemetry tags revealing unexpected cross-ocean journeys, drones capturing fine-scale behaviours and satellite images allowing gray whales to be counted from space, our knowledge of gray whales - and their mammoth migrations - is expanding.

However, a recent increase in sea temperature has been impacting marine life in the north-east Pacific Ocean. Already in the midst of an unusual mortality event, the gray whales face these changing oceanographic conditions in addition to the risk of ship strikes, disturbance, entanglement in fishing gear, ocean noise and predation during their journeys. The effects of these threats are both cumulative and interactive; a challenge both for the whales and the scientists working to understand them.

The IMarEST Stanley Gray Lectures (and the annual Stanley Gray Awards) are named in memory of Stanley Gray who was the Chief Mechanical Engineer at the Port Directorate of Basra during the 1950s & 60s. When he died in 1973, he left half his estate to be held by the Institute in trust to create the Stanley Gray Fund. He expressed the wish that the money should be awarded via a scholarship or prize to wherever the Institute saw distinction in Marine Engineering. This remit has been expanded following due process to include Marine Science and Technology. The Stanley Gray Series of prestige lectures, launched in 2002, is held to mark his generosity to, and patronage of the Institute.