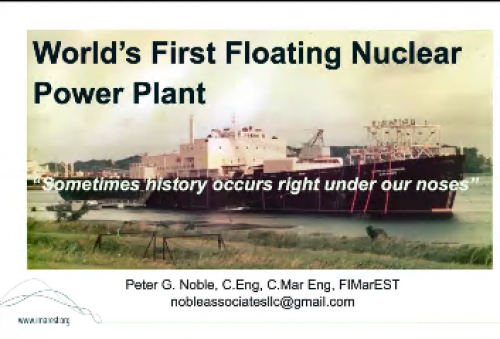 IMarEST TV recording by the IMarEST Houston (US Gulf Coast) Branch on the 13th October 2020. This webinar was presented by Peter Noble, naval architect and marine and ocean engineer with a wide range of experience in the maritime and offshore sectors. This webinar also features introductions from IMarEST CEO Gwynne Lewis.

This presentation tells the story of the MH-1A STURGIS, a WW II Liberty ship.

The ship was built in Panama City, FL, in 1945 and in the mid 1960s converted to house a 10MW nuclear power plant. She then saw service in the Panama Canal Zone from 1968-75, and returned to the US in the 1977 for de-fueling and lay-up. In 2015 she was brought to Galveston for final removal of the remaining nuclear plant components and then in 2018 moved to Brownsville for final disposal.

The final act in an interesting piece of maritime history took place in Brownsville Texas in 2019 where the final ship-breaking of this unique ship was converted into the world’s first floating nuclear power plant by the US Army Corp. of Engineers.

Peter Noble is a naval architect, marine and ocean engineer with a wide range of experience in the maritime and offshore sectors. His career began as an apprentice draughtsman at Denny Bros. shipyard in parallel with attending the University of Glasgow.

His career has included positions with shipyards; with ship and offshore design consultants; with offshore and marine research and development companies; with major classification societies and as chief naval architect with the international oil company. Peter is a vice president of IMarEST and he is a past president of the SNAME. He currently serves on the advisory boards of a number of marine and offshore companies, technical institutions and universities, in the US, the UK, Canada and Singapore.