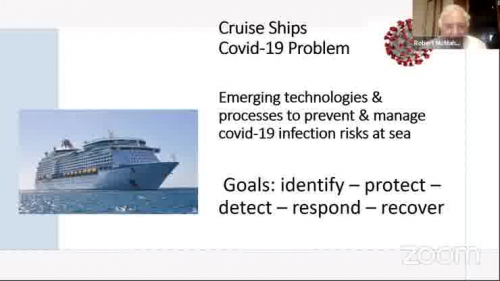 How can microscopic Covid-19 pathogens transmit from person to person, bring the International Cruise Industry to a standstill and immobilise some of the world’s largest warships?

This webinar takes a look at that question from the perspective of maritime professionals responsible for the safe, efficient and seaworthy operation of ships under his or her management oversight.

The speakers also try to help in understanding and solving some of the technical, management and operating problems arising on cruise ships & other vessels due to the coronavirus outbreak.

Robert has been a member of IMarEST for 55 years, the last 48 as a Fellow. His career progressed from seagoing Chief Engineer to Superintendent Engineer, Shipping Fleet Manager, Fishing Fleet Superintendent, Charter Vessels Owner and Energy Efficiency Specialist, in parallel with 42 years in the Royal Australian Naval Reserve to the rank of Lieutenant Commander.

Michael commenced his sea-going career as an integrated rating in 1991, sailing with a variety of Australian companies before gaining his tickets at the Sydney Institute of Technology. He then decided to see the world by sailing with P&O Containers, Teekay Tankers, Clyde Marine and Royal Caribbean cruise ships. On gaining his Master Class I, he joined Adsteam as a tug master before moving to Maritime Safety Queensland as a pilot in the port of Mackay. He has spent the last 12 years as a pilot in his home town of Sydney.

Bernie has been working for the Tas Bull Seafarers Foundation to project manage an initiative to improve wellbeing and assistance to foreign seafarers on ships berthed at Australian ports by focusing on the provision of WIFI for seafarers when in port. He began with a focus on ports in the state of New South Wales. Previously he was employed as a National Lead Organiser with the Maritime Union of Australia.

Sr Mary came to Australia from Ireland following her sister Geraldine, also a nun, in 1979 and initially trained to be a nurse. After her profession as a Sister of St Joseph, she worked at St Vincent’s Hospital until her appointment as Port Chaplain in 1992. Today, she is the regional Coordinator for Oceania for the Apostleship of the Sea, and was recently in Rome to attend an international congress organised by the Pontifical Care of Migrants and Itinerant People.