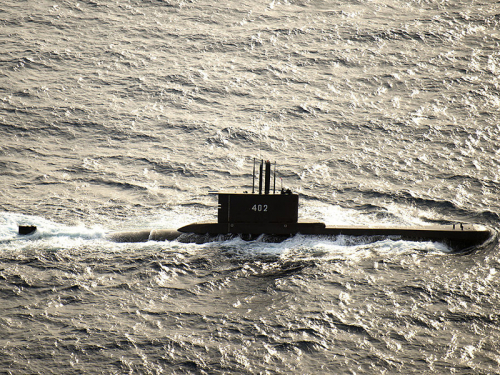 In the wake of another tragic submarine sinking, this time in Indonesia, is it time for some of the world’s navies to reconsider how they crew, use, and maintain their aging assets?

On 21 April 2021, the Indonesian Navy submarine KRI Nanggala (402) disappeared while taking part in a training drill 50nm north of Bali.

Built in the 1970s and taken into service by the Indonesia Navy in 1981, the 59m (193ft) vessel was carrying 53 crew. Although its maximum crew design capacity was 34 berths, taking additional trainees, training staff and contractors to conduct weapon trials is not unusual or unsafe, provided there are sufficient escape stores.

The sinking of the Nanggala adds to a disheartening list of aging submarines lost with significant fatalities. These include the Argentine submarine San Juan, which was 32-years-old when it sank after an electrical fire in 2017, killing all its 44 crew. A commission blamed years of under-funding which led to a “growing deterioration” of the vessel.

While countries such as the USA and Japan retire submarines after 20 years or so of service, others such as Ecuador and Venezuela, allow theirs to operate well into their fourth decade. Nanggala’s sister vessel, Cakra, is 36-years-old and currently in dock for repair – but there are growing calls for it to be decommissioned.

Matt Bolton, Chair of the IMarEST Naval Engineering Special Interest Group (NESIG), explained: “Submariners operate in a very hostile environment with ever present challenges to the safe operation of the submarines.

“Whether submerged in the middle of the ocean or close to land, the main defence in keeping a submarine safe is the highly trained personnel who know how to react to an unsafe condition.

“It is not based solely on engineering and design, but more importantly on the operators and the management of risk.”

Internal sea wave – a possible cause

Back, though, to the Nanggala. Indonesian authorities say contact was lost shortly after it prepared to dive and point to preliminary assessments that suggest a strong underwater current, or internal wave, may have contributed to the sinking.

“Internal waves are a natural phenomenon that happens very regularly in atmospheric fluids,” explained Mathieu Courdier, a PhD student at the Australian Maritime College and the presenter of this year’s IMarEST Stanley Gray lecture.

“They form when a moving fluid encounters an obstacle – or other fluid layers with differing salinity, density or speed – which it then has to ‘jump’ over, and then falls down.

“Indonesia, by its geographical nature, is prone to internal sea waves because the seafloor is very rugged, with deep basins, trenches and underwater cliffs.

“If the Nanggala was hit by an internal wave, its crew would, first of all, have had to realise and understand what was going on, and why the vessel was diving when its controls were set up to keep it at a constant depth. They would then have had to react perfectly – and very fast. 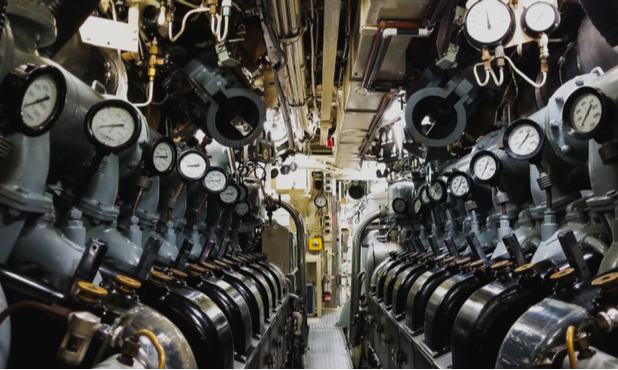 Stock image. A view inside a submarine, with pressure gauges and the engine (Credit: Shutterstock)

“The submarine itself is stuck in a narrow vertical column. Going too deep would see it crushed by pressure and going close to the surface in an uncontrolled manner could risk a potential collision with a surface vessel.

Trying to find a lost submarine can be a challenging task, added Mathieu Courdier: “Rescue vessels are able to operate to depths of around 600m (1,900ft), but at a depth of 850m the Nanggala would have been irreversibly damaged.

“Because there are no black boxes on submarines, autonomous underwater vehicles and submersibles need to be used to dive to the crash site to film what has been found and assess whether or not the hull can be salvaged. These operations are costly and require expert skills.”

The Indonesian government says it plans to salvage the wreck of the Nanggala using either gas balloons or high-powered magnets.

Grief and support after loss

“The pain of any lost submarine and the grief of the crew’s families is felt by all submariners, regardless of nationality,” added Matt Bolton.

We Remember Submariners (WRS) is a registered charity and provides financial aid to people from all nations who are feeling the pain of a lost submariner.  At the time of publication, WRS has already raised over £28,000 for the families of those affected by the loss of the KRI Nanggala.

If any personnel would like to donate to this charity, you can do so via their website.

Lost at sea: Submarines and fatalities this century

The IMarEST Naval Engineering Special Interest Group (NESIG) is for all those engaged with the global naval engineering community.

Tweet
Published in The long read
Tagged under
More in this category: « Ever Given’s big warning for shipping Concerns over time pressures »
back to top