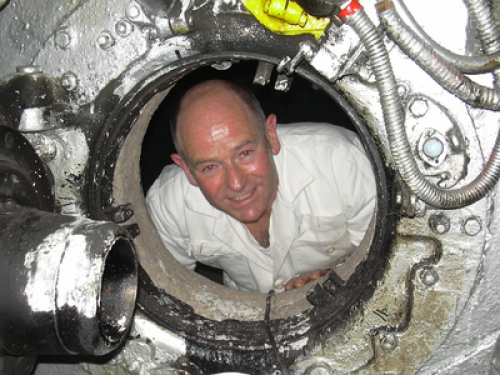 A buzz of excitement moved through the MV Artemis as the crew prepared for an overnight stay in Hong Kong – a rare chance for everyone to enjoy time together ashore. Everyone, that is, except the cruise liner’s technical team.

Waiting for them on the quayside was the ship’s newly refurbished power take-off pinion and clutch assembly (PTO) – all 2.7 tonnes of it.

“We’d landed it ashore in Lisbon, and now it had been returned to us for refitting,” says Peter Gibbins, recalling events that night aboard P&O’s MV Artemis.

“We knew we had to get it aboard the ship, fitted, tested and working without any hitches that might jeopardise the ship’s scheduled departure the next morning. At the same time we had to take on 800 tonnes of fuel oil, 20,000 litres of lubricating oil, and 300 tonnes of fresh water – and complete all of our routine maintenance.”

A truck-mounted crane lifted the PTO into one of the ship’s outer doors where Peter’s eight-man team had two trolley lifts waiting to receive it.

“The weight of the PTO necessitated some skilful coordinated trolley driving – one pulling and the other pushing – to get the unit safely inside the vessel. It was then manoeuvred from the aft baggage area along the main deck to the pilot station where the stores access hatch to the engine room was located. We had to squeeze it through some small gaps and swing it round some very tight spaces. We knew the slightest mistake would be disastrous.”

Artemis was built by Wärtsilä – as Royal Princess – for Princess Cruises in 1984. It was renamed Artemis in 2005 when it was transferred to P&O Cruises, and six years later it would be renamed again as Artania following a move to the fleet of a German travel firm.


“When we received Artemis at P&O Cruises it was over 20 years old and in poor shape,” says Peter. “A lot of work had to be done to it, but we had an excellent team, and the challenges and graft involved forged us into an effective and close-knit unit.”

To get the PTO through the stores hatch the team had to rig up chain blocks and strops, fleet the assembly across from the main deck to the far side of the pilot station, then readjust the lifting arrangement to hold the assembly with one end higher than the other.

There, strops were rearranged to lift the PTO at an angle and lower it down the starboard aft engine room steps.

“Even with all of the steps removed there was just enough room for it to pass,” says Peter. “All of this was challenging enough, but more was to come.”

A meeting was held to decide how the team would tackle the next step. The First Engineer sent everyone who wasn’t essential to the task away for a break, which would also help to keep their legal working hours within limits.

The PTO had to fit into the gearbox bearings and the gear teeth had to mesh with the teeth of the gearbox at an angle – any mistake would be a catastrophe. Slowly, just one or two links of a chain hoist at a time, the PTO was fleeted into position.

“When the gear teeth meshed there was a collective release of breath, and when we were finally down there was a huge sigh of relief from everyone, including the De Schelde gear representatives who had been observing the operation.

“We now had to cover everything to stop debris falling into the gearbox while the lifting gear was removed. Then the bearing tops were fitted, clearances checked by the De Shelde reps, and the gearbox cover replaced.”

By now it was around 0300hrs. With the clutch reassembled the unit was operated manually, final measurements taken, and the oil flow to the gearbox proved. A final check by the De Schelde representatives confirmed that the job had been completed, and everything had gone well.

“I remember feeling disappointment at first that evening in Hong Kong, when we knew we wouldn’t be able to go ashore,” says Peter. “But it turned into a memorable night and an extremely rewarding experience, completing such a challenging task under severe time and space pressures, and working with such a great team.

“The job of Chief Engineer was, by then, beginning to change out of all recognition, with more and more regulations and you never seemed to be away from screens and computers.

“I tried an office job later, a stint with Cunard (CUK) working on maritime standards, but it wasn’t for me. So when I was asked to fill a vacant slot as Staff Chief Engineer – my preferred job – back in the fleet, I jumped at it. It’s a different world now.

“Working on the Artemis in those days felt like being part of a family, and it was always a pleasure working with the lads. They were a really good team and that kept me straight.

“Looking back, I’m grateful to have worked in a golden age of marine engineering. I am one of a few who has had the chance to work on steam reciprocating engines, steam and gas turbine plants as well as slow, medium and high-speed diesels. And to see the introduction of the electronic age into our industry.”

Peter Gibbins started his maritime career on St. Andrews dock in Hull, as an apprentice marine engine fitter and turner in 1969. Then joining his first shipping company Ben Line, before moving on to become a chief engineer within the offshore and finally the cruise line sector. He retired in 2018 and continues to support his local IMarEST branch in Hull, UK.

View the embedded image gallery online at:
https://www.imarest.org/themarineprofessional/on-the-radar/item/5636-changing-times-for-mv-artemis#sigProId9db5589ba1
More in this category: « Deepwater Horizon 10 years on: BP’s Gulf of Mexico science legacy COVID-19: The Catalyst For Maritime's New Normal »
back to top