Can ports be future-proofed to prevent harbour hazards? 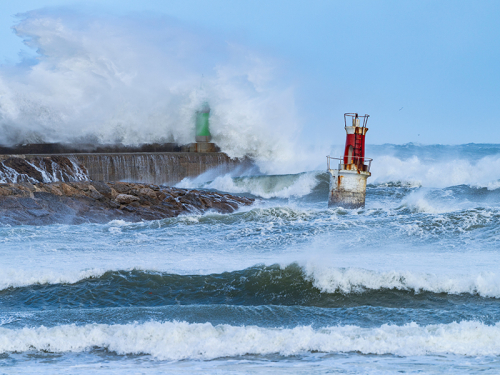 With weather extremes now impacting the economic effectiveness of vital maritime infrastructure with increasing severity, should authorities be taking a more strategic approach to protect ports from climate change…?

The vessel was left to fend for itself in heavy seas as all available berths and anchorages on both sides of the US/Canadian border were full up due to the severe weather, with most port operations brought to a standstill by the resulting flooding and high winds which damaged connected road and rail networks – a phenomenon that is becoming increasingly common.

While it’s becoming increasingly evident that ports will, in future, be affected by several types of intense climatic hazard – such as heat waves and extreme winds – the most significant impact will come from rises in global sea levels.

Research by the World Meteorological Organization (WMO) suggests a future globally averaged mean sea level rise (SLR) of around 4cm per decade. However, SLR projections are continuously being revised upwards, with data from the Intergovernmental Panel on Climate Change (IPCC) suggesting that by 2100 (with 2°C of global warming above pre-industrial levels) global SLR could be 93cm higher than the mean average SLR seen between 1986-2005.

A new study by the USA’s National Center for Atmospheric Research (NCAR), meanwhile, has also analysed how increases in temperature, precipitation, wind, and sea levels, will affect port operations worldwide.

It predicts that, if greenhouse gas emissions are not reduced, 90% of ports will be facing severely increased risk levels by 2100, with the most affected ports located in the Pacific Islands, Caribbean, and Indian Ocean, followed closely by ports in the North African Mediterranean and Arabian Peninsula. 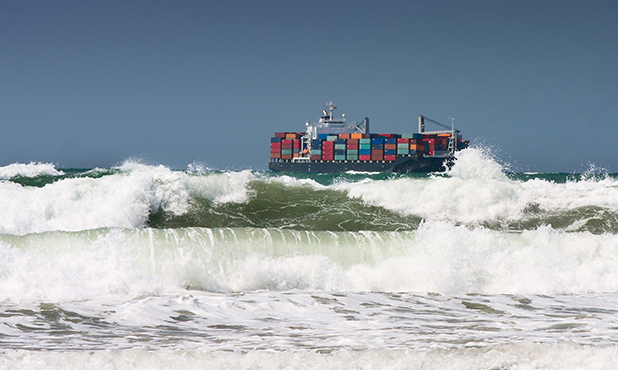 Rough sea with container ship in the background (Shutterstock)

It’s clear that ports around the world must, therefore, start to urgently plan and implement climate change adaptation measures as soon as possible.

A new paper by maritime consultancy HR Wallingford and the British Ports Association has examined the potential impact of climate change on ports and their associated infrastructures, and set out how the sector needs to adapt.

“Port assets often have a lifespan of several generations, while a breakwater or quay may be expected to stand for 100 years or more,” explains Tom Matthewson, ports manager at HR Wallingford, “That's why it's important that port authorities and operators now start to consider how their infrastructure will stand up to what is likely to be a very different climate in 2120.

“Whilst ports are no strangers to flooding or extreme weather, these events are likely to become stronger and more common in the decades to come, and infrastructure operators need to adapt accordingly.”

The paper sets out the measures that ports need to consider when planning their future infrastructure investment, including: building in allowances for sea level rises; investing in assets that will make it easier to raise breakwaters and sea walls in the future; and planning how to replace structures when required.

According to a recent study by the European Sea Ports Organisation (ESPO), 65% of European terminals have now started to put climate change at the very centre of their plans when drawing up future infrastructure projects.

Europe’s largest seaport, the Port of Rotterdam, which has calculated that storm surges caused by climate change will cost it more than €67m per year by 2100, has already embarked on a flood resilient plan to assess the best methods to prevent future flooding.

The Philippine Ports Authority (PPA), meanwhile, has begun a mandatory project of planting of mangroves and trees for every contract and permit issued, and banned the use of single-use plastics in all of its controlled ports.

“We are shifting our focus towards sustainable port operations to reduce our carbon footprint and complement the initiatives of partners like shipping lines to reduce greenhouse gases (GHG) emitted by vessels and port equipment to a much more manageable level,” says PPA general manager Jay Santiago.

Navigating a Changing Climate – a multi-stakeholder coalition of nine associations, including IMarEST, with interests in waterborne transport infrastructure – held a workshop at the COP26 International Maritime Hub in Glasgow in November, which heard presentations from port practitioners from around the world, followed by panel discussion sessions which you can still view here.

"Ports are keystones to our future low-carbon society," insists Mark Button, a senior maritime engineer who launched Resilience4Ports, a forum that brings together stakeholders from across the ports supply chain to pool ideas that could help authorities create more resilient port infrastructure in the future.

“We now have an opportunity for ports to attract new investment, deliver transformation and new efficiencies, and help unlock rapid decarbonisation.”

Tweet
Published in The long read
More in this category: « Ten ways to cut shipping’s contribution to climate change – from a researcher Navigating modern navigation »
back to top