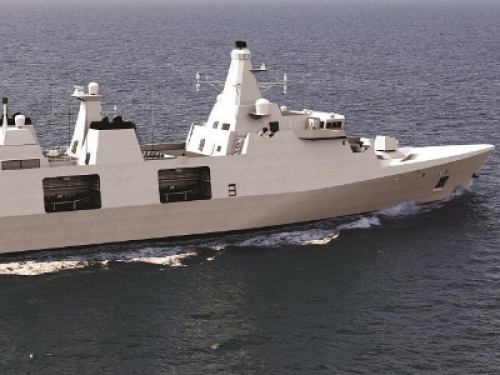 The UK Royal Navy Type 31 frigate has been designed to deliver a wide range of peacekeeping, humanitarian and fighting capabilities for a predicted cost of just £250m each.

John Barnes brings you the latest on the production of the British-designed warship which is already attracting interest from naval counterparts across the world.

In April the second round of supply chain contracts for the Royal Navy’s (RN) Type 31 general purpose frigate was announced by Babcock International, the lead contractor for the design.

This new class of five vessels is seen as a more cost-effective complement to the Type 26 design anti-submarine frigate, eight of which are planned for the RN, with three already under construction.

At a predicted average production cost of £250m, it has been calculated that all five 31s together will cost just a little more than a single Type 26.

The first Type 31 frigate is scheduled to be in the water in 2023 with an in-service date of around May 2027 following extensive first-class trials, though how this timetable could be affected by the current coronavirus pandemic is not clear.

Beyond the RN requirement there is rumoured interest in the design by a number of overseas navies, including Australia, Canada, New Zealand, Indonesia, and Poland, with others in Asia, South America and the Gulf also considering contracts.

It brings the prospect of export orders for British-designed warships for the first time in many years.

Design appeal of the 31

The design chosen for the Type 31 is the Arrowhead 140, as announced in September 2019, with construction taking place at Babcock´s Rosyth yard in the UK which is being expanded for the programme.

The Arrowhead 140 is a so-called light frigate developed by Team 31, led by Babcock International as prime contractor for the programme, in conjunction with Thales UK, BMT and Odense Maritime Technology (OMT). It is the first time for many years that a company other than BAE has won a major naval contract.

The new design is said to provide the Royal Navy with a class of ship having proven ability to deliver a range of peacekeeping, humanitarian and fighting capabilities, and is based on OMT's Iver Huitfeldt class hull form currently in service with the Royal Danish Navy.

Back in July 2016 at a UK Defence Select Committee hearing, then First Sea Lord Admiral Sir Philip Jones described the design as “a much less high-end ship. It is still a complex warship, and it is still able to protect and defend and to exert influence around the world, but it is deliberately shaped with lessons from wider industry and off-the-shelf technology to make it more appealing to operate at a slightly lower end of Royal Navy operations.”

In reality, the design gives the RN a much-increased number of platforms for a variety of missions, even if it is inferior to the Type 26 in overall capability.

Although capability is important, without enough units resources will be overstretched in the future. However, it is perhaps a pity that the Sea Ceptor capacity has been halved from 24 to 12 missiles.

Unlike the Type 26 and all previous frigates and destroyers since the 1970s, the 31s will be powered solely by diesel engines rather than a mix of gas turbines. This will be the first time diesels alone have powered a major RN warship since the Type 41 and 61 vessels of the late 1950s.

The choice of a high-speed diesel is a balance between its better fuel efficiency but higher weight versus those of a gas turbine. Nevertheless, the greater weight helps to offset the weight high up of various systems in terms of stability.

The new class will be equipped with four Rolls-Royce MTU high speed units for propulsion, each rated at 8.2MW and driving through two Renk twin input/single output reduction gearboxes to MAN Alpha VBS Mk 5 CP propeller systems for a maximum speed of 25 kt or more. The main units will be in separate engine rooms and will feature asymmetric shaft lines. MTU will also supply the diesel generators.

The propellers and all related equipment will be supplied by MAN Energy while Danish company Blunox A/S is to supply its SCR (Selective Catalytic Reduction) equipment to significantly reduce emissions from the main engines and diesel generators.

Finally, a subcontract has been placed with UK-based Darchem Engineering Ltd for the supply of intake and exhaust systems for the main engines and generators.

The propulsion system has been designed to ensure a low underwater-radiated noise (URN) signature and will also comply with International Maritime Organisation (IMO) Tier III regulations.

Babcock has also awarded a chilled water plant sub-contract with Novenco AS, providing critical system capability for the HVAC system.

Lloyds Register (LR) has been appointed as provider of naval assurance services for the programme. The Type 31s will be designed and constructed to LR’s Naval Ship Rules. During the first phase of the programme, LR will provide design assessment and support, which will result in formal appraisal of the design.

Back in January, planning permission was given for the development of a new £50m building hall at Babcock’s Rosyth site in which the Type 31s will be constructed. The building is designed with flexibility for future shipbuilding operations beyond Type 31 construction.

The relatively simple building measures 160m in length, 60m wide and 40m high and will allow two Type 31 frigates to be assembled side by side. The main internal feature will be two rail-mounted gantry cranes. Both the north and south ends of the building will have two vertical-lift ‘megadoors’, each 24m wide by 30m high with a demountable column between, creating a 48m-wide opening.

John Barnes is a graduate naval architect who has been writing about marine technology since 1971. He was the former editor of Marine Engineers Review (MER) and is a Fellow of IMarEST and a Member of RINA.

Tweet
Published in The long read
back to top