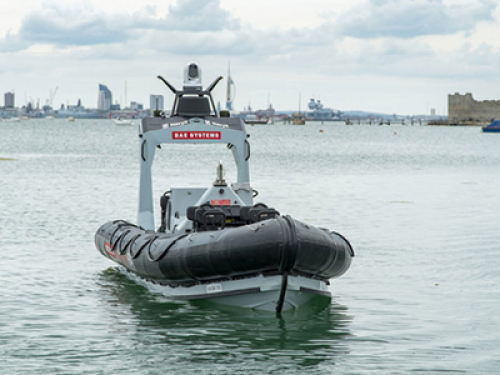 With autonomous vessels set to revolutionise naval operations and meet changing global priorities, the Royal Navy has created a new research wing, NavyX, to ensure it remains at the forefront of military developments in the decades to come.

This summer saw the launch of the Royal Navy’s first crewless boat.

In partnership with BAE Systems, the senior service is investing £3.2 million (US$4.1m) in a research programme to test the autonomous capabilities of an upgraded Pacific 24 (P24) Rigid Inflatable Boat (RIB), and assess how it might be used, operating from future classes of warships, to execute its own missions.

It’s hoped the crewless P24 will be able to operate individually or within a small autonomous flotilla, at speeds of up to 38 knots, carrying out anti-piracy operations, border controls, intelligence gathering, and search and rescue.

The autonomous P24 trials are just one part of the Royal Navy’s new autonomy and lethality accelerator programme – NavyX – a specialist wing working closely with industry and academia to rapidly develop and trial cutting-edge technologies for use above, on, and below the waterline.

“The crewless Pacific 24 is not just a step change for the Royal Navy in unmanned operations, it also ensures that the Navy will remain at the forefront of technological improvement and innovation,” explains Lieutenant Commander Rob Manson of the NavyX team.

“Its initial tasks are likely to be similar to those already performed by a conventional Pacific 24, but the new autonomous nature of this craft offers huge flexibility and capability that can be constantly improved – allowing continuous updates and upgrades and therefore regular additions to the toolbox of operational planners.” 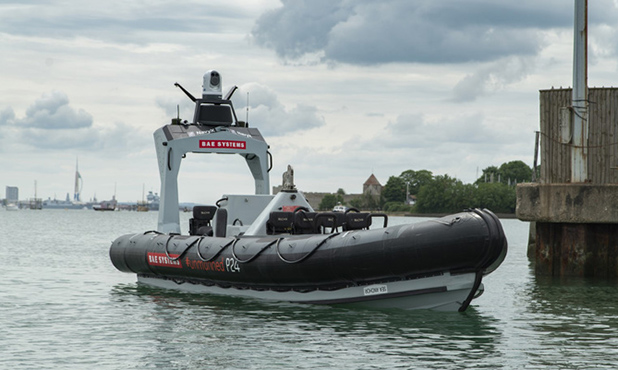 NavyX’s overall budget of £75 million (US$96.2m) is also being used to develop a fleet of autonomous mine-hunters.

“We’ve been working closely with industry partners to realise this emergent capability for a considerable time,” says Lieutenant Commander Ross Balfour, Officer in Charge of Project Wilton. “It’s very exciting to finally see Harrier in the flesh and allow my highly-trained team to get their hands on the kit and start to develop the potential of this highly capable system.”

Harrier can operate in three modes – manually, remotely and autonomously – giving a large range of flexibility to deploy Towed Side Scan Sonar systems or Autonomous Underwater Vehicles, providing the ability to survey the seabed with a high degree of accuracy and, after trained analysis, determine the presence of mines and other underwater threats.

Harrier is joining its sister-vessel RNMB Hazard ahead of the delivery of a third and final Wilton boat, RNMB Hebe, next year. Hebe will use a Portable Operations Centre Afloat to allow it to control both Harrier and Hazard while co-ordinating the trio’s autonomous operations.

The NavyX programme is being run in parallel with the Royal Navy’s development of the new Type 26 Global Combat Ship, which has been designed to remain in service beyond the middle of the century.

The BAE Systems-built Type 26 Global Combat Ships will be able to undertake a wide range of roles from high intensity conflict to humanitarian assistance, with variants sharing a common acoustically quiet hull, modular design and open systems to facilitate through-life support and upgrades.

A key feature of the Type 26’s design will be its flexible mission space, capable of containing four 12m sea boats, a range of manned and unmanned air, surface or underwater vehicles, or up to eleven 20ft ‘capability modules’.

A new Type 31 frigate programme is also underway, designed to provide the Royal Navy with five affordable frigates which, along with the Type 26, will replace the UK’s ageing fleet workhorses, the Type 23s. 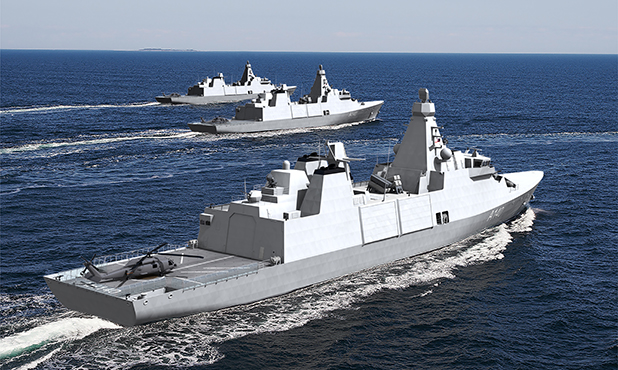 While the Type 26 programme will cost £8 billion for eight ships, each of the planned five Type 31s will cost just £250 million.

Babcock completed the Type 31’s Whole Ship Preliminary Design Review (PDR) in August marking the end of the engineering functional design phase. The review provides a key indicator of the compliance and engineering risk in maturing the 3D CAD model.

“Completing the Whole Ship PDR is a key milestone for the Type 31 programme and signals our move into Detailed Design,” explains Graeme Thomson, Babcock’s Type 31 programme director. “A lot of hard work went into achieving this and we’re looking forward to the next stage in this exciting and challenging programme.”

Naval innovation is, of course, global as can be seen by the US Navy’s technological capabilities as they continue to be boosted by continual massive funding from the Pentagon.

Its newest, and most-advanced, vessel is USS South Dakota – a Virginia-class nuclear-powered, fast-attack stealth submarine, which cost a whopping $2.6 billion to build.

South Dakota is the 17th Virginia-class sub to come into service, and the US Navy hopes to have at least 66 of the 377ft-long vessels fully operational by 2048.

Construction is also about to begin on the first of the US Navy’s latest Columbia-class nuclear-powered ballistic missile submarines, due to enter service in 2031.

The 170m-long vessels will feature X-shaped stern control surfaces, sail-mounted dive planes, super-strong hulls covered with a sophisticated sound-absorbing anechoic coating, and Large Aperture Bow (LAB) sonar systems. They will be capable of travelling at more than 20 knots at depths of around 800ft and are scheduled to have a service life of 42 years. The estimated build cost for each vessel is a staggering $14 billion.

Watch videos of the USS South Dakota on YouTube.

Tweet
Published in The long read
Tagged under
More in this category: « IMO report: Shipping emissions are increasing Beyond COVID: Our chance to grow the Blue Economy »
back to top