The evacuation of an expedition ship in the Canadian Arctic raises questions about the growing number of passengers now travelling into remote and often hostile marine environments that have little or no adequate hydrographic data.

In August 2018, the passenger vessel Akademik Ioffe ran onto a rocky shoal in an area of the Canadian Arctic that was unfamiliar to its crew, and which had never been surveyed to any modern, adequate hydrographic standards.

Launched in 1989 as an ice-strengthened ocean research vessel and owned by the Shirshov Institute of Oceanology in Moscow, Russia, the 117m (383ft) Akademik Ioffe was, at the time of the incident, on charter to One Ocean Expeditions, a Canadian company specialising in remote expedition cruises. Onboard were 102 passengers, 24 expedition staff and 37 crew.

Events began to unfurl as the ship headed towards the high latitude Hecla and Fury Islands in steadily deteriorating sea conditions. Concerned that their planned route would negatively impact their passengers’ experiences, the expedition leader and master agreed to detour the vessel towards the Astronomical Society Islands, which promised greater shelter and comfort.

Details of the new route were sent to the Canadian Coast Guard (CCG) and Northern Canada Vessel Traffic Services and approved by Transport Canada.

Thirty-knot winds and a quartering swell eventually rendered the ship’s autopilot ineffective, leaving the helmsman to steer by hand at a minimal speed of eight knots in order to try and maintain directional stability. 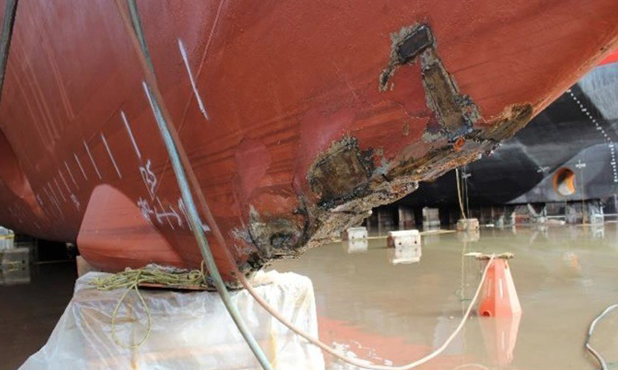 Damage to the hull (Credit: Transportation Board of Canada)

Moments later, crushing noises and vibrations were heard and felt throughout the vessel, and the ship came to a sudden stop, heeling to its starboard side.

Passengers who were standing lost their balance, and plates and crockery were smashed as they were flung across the galley and dining room floors.

The radio officer sent out a DSC (digital selective calling) distress message, which was immediately received by the CCG and Joint Rescue Coordination Centre in Halifax, Nova Scotia; Stavanger, Norway; and Portsmouth, USA.

Several rescue assets were quickly deployed, including a Hercules aircraft.

Fortunately, the Akademik Ioffe was able to refloat itself just a few hours later using its own propulsion and a flooding tide, before anchoring safely two miles from the shoal to allow the evacuation of its passengers and expedition staff, using inflatable boats, to its sister ship, the Finnish-built Akademik Sergey Vavilov.

The Akademik Ioffe sustained serious damage to its hull during the incident.

The accident investigation report into the Akademik Ioffe’s grounding, by the Transportation Board of Canada, points out that voyage planning in the Canadian Arctic faces unique risks, and that until its waters are surveyed to modern or adequate hydrographic standards there will continue to be a persistent risk that vessels will make unforeseen contact with the sea bottom.

Regarding Akademik Ioffe’s grounding specifically, the report concluded that:

The number of passenger cruise vessels operating in the Canadian Arctic increased from 11 in 2010 to 15 in 2019 – with increasingly larger vessels carrying increasing numbers of passengers. The number of people on board these vessels, including crew, doubled from 2015 to 2019 to more than 8,300.

Between 2000 and 2018, there were 74 vessel groundings in the Canadian Arctic, six of which involved passenger expedition vessels.

The Canadian Arctic’s remoteness, harsh weather conditions, sea ice and historically low marine traffic volume have, over many years, impacted the quality of the region’s hydrographic data – much of which is decades old.

Only 14 per cent of its waters have been surveyed to modern or adequate standards.

In many parts of the Canadian Arctic, spot soundings through the ice or reconnaissance track soundings are the only survey data currently available. 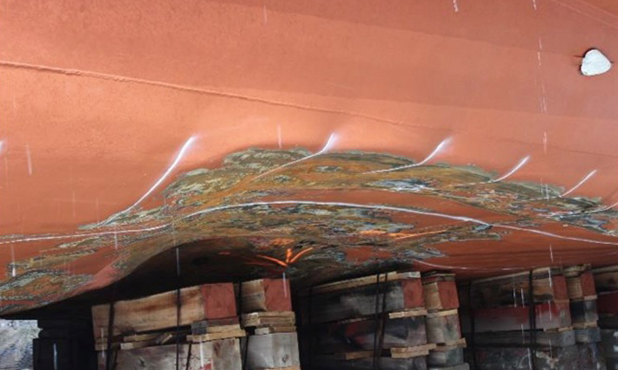 (Credit: Transportation Board of Canada)

Spot soundings through the ice are single depth measurements taken at 2,000m intervals, and commonly referred to as through-ice bathymetry.

Depth measurements are taken through the ice with a single beam sounding, using a transducer placed on the ice, and recording only depth and position. The hydrographer is transported between the interval sites by helicopter.

The disadvantage of the method is that the shape of the seafloor between sites remains unknown, and depths and contouring can only be inferred.

Tweet
Published in Troublespot
More in this category: « Why did Norwegian cargo vessel run aground despite warnings? Combustible cargoes – how can we prevent them? »
back to top