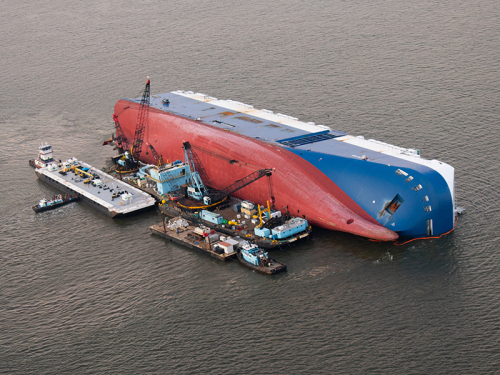 When a chief officer made a fundamental error entering ballast quantities into his ship’s stability computer programme, it resulted in the sudden total loss of the Golden Ray and 4,000 vehicles – at an estimated total cost of more than $200m. How could it happen?

In the early hours of 8 September 2019, after having loaded a cargo of cars the previous day, the 656ft (200m) Marshall Islands-flagged roll-on/roll-off vehicle carrier Golden Ray departed the Colonel’s Island Terminal in the Port of Brunswick, Georgia, USA, en route to Baltimore, Maryland.

A pilot from the Port of Brunswick navigated the vessel as it proceeded slowly outbound through the Brunswick River and into St. Simons Sound. The pilot manoeuvred the vessel through two left turns, then, as Golden Ray approached a right bend leading toward the Atlantic Ocean, he ordered a turn to starboard. As the vessel began to come around, it quickly heeled to port.

The master immediately issued rudder commands in an attempt to counter the movement, but Golden Ray continued to heel over. In less than a minute it was heeling to port at around 60°. Water started entering the vessel through the portside pilot door which was not yet shut. Watertight doors – which were also not yet closed – allowed further significant flooding into the ship, blocking the egress from the engine room, where four crew found themselves trapped. The vessel ended up lying on its port side, on the riverbed, at an angle of 90°. 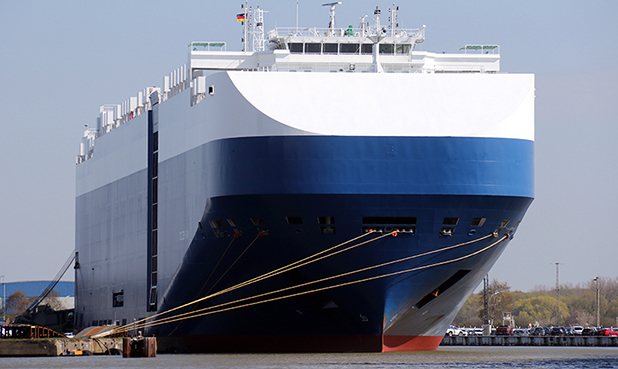 The Golden Ray April 15, 2019 in the port of Bremerhaven (Credit: Shutterstock)

The US Coast Guard responded to the incident, along with tug and pilot boats from the Port of Brunswick. Responders were initially able to rescue the pilot and 19 of the 23 crew. However, the four engineering crewmembers remained trapped in the engine room for another 40 hours, until the responders were finally able to cut through the ship’s hull to rescue them the following evening.

Golden Ray sustained damage due to flooding, fire, and saltwater corrosion, and was declared a total loss at $62.5m. An additional $142m of cargo, including 4,100 vehicles, was also lost. Two crew suffered serious injuries. 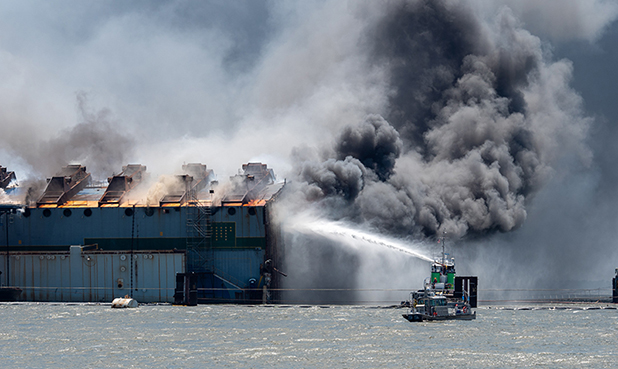 An accident investigation report by the US National Transportation Safety Board (NTSB) determined that the probable cause of the capsizing of the Golden Ray was the chief officer’s error in entering ballast quantities into the stability calculation programme, which led to his incorrect determination of the vessel’s stability, resulting in Golden Ray having an insufficient righting arm (the distance between the forces of buoyancy and gravity) to counteract the physical forces developed during the turn while transiting outbound from the Port of Brunswick through St. Simons Sound.

In less than a minute Golden Ray was heeling to port at around 60°.

The NTSB investigation report’s conclusions include the facts that:

The company had no procedures to verify stability calculations, so the master and company were unaware that the vessel was sailing without meeting stability requirements during the accident voyage and two previous voyages.

“The circumstances of this accident show that even when transiting in protected waters, watertight integrity is critical to the safety of the vessel and its crew,” the report adds. “It is essential that operators ensure that crews verify that all watertight doors are closed in accordance with safety management system procedures.”

The Golden Ray incident bears the common hallmarks of a long list of similar roll-on/roll-off ferry capsizes stretching back many decades, including:
MV Hero, which sank in the North Sea in 1977 due to a loss of watertight integrity, killing one crewmember; MS Herald of Free Enterprise, which capsized in 1987 moments after leaving Zeebrugge, with its bow doors wide open, killing 193 passengers and crew; MV Sewol which capsized in 2014 while taking a sharp turn off the South Korean coast, dislodging its heavily overloaded cargo and killing 304 passengers and crew. And MV Nyerere, a Tanzanian ferry which capsized in 2018 on Lake Victoria after attempting a sharp turn just 50m from its destination pier, killing an estimated 228 people.

Tweet
Published in Troublespot
Tagged under
More in this category: « Flawed decision behind tanker accident Shearwater: What caused towing failure off Cape Wrath? »
back to top