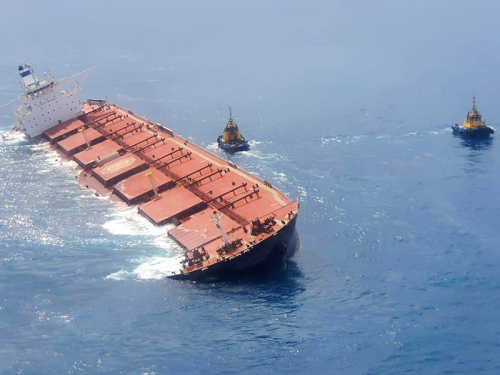 The decision by the master of an ore carrier to deviate from its planned route to cut across a sandbar led to his ship being grounded, deemed a total loss, then scuttled 2,700m below the Atlantic Ocean at a cost of millions of dollars.

In February 2020, the Marshall Islands registered vessel Stellar Banner, made contact with a sandbar shortly after departing Ponta da Madeira, in the north-east of Brazil, while laden with nearly 300,000 tonnes of iron ore.

Damage to the hull of the 328m (1,076ft) VLOC (very large ore carrier) resulted immediate and extensive flooding and the ship was anchored while the crew tried to control the water ingress using fixed and portable pumps.

However, after several hours it became clear the water was flooding the ship faster than the crew could pump it out. The master moved Stellar Banner into shallower water and then grounded the ship to prevent it from sinking further.

When the vessel was refloated it was re-anchored in deeper water where a damage survey was conducted. Based on the findings, it was deemed that Stellar Banner was a constructive total loss. Two weeks later Stellar Banner was scuttled 60nm northeast of Brazil in 2,700m (9,000ft) of water.

The incident began – according to a Marshall Islands accident investigation report – when the passage plan for the ship’s voyage from Brazil to China was prepared by the second officer and then approved by the master.

The height of the tide used by the second officer to calculate the under keel clearance for crossing the sandbar was not updated to account for the ship’s delayed departure due to the late arrival of the pilots.

The master, however, didn’t share his assessments of the ship’s position with the OOW. When the master decided to deviate from the planned route, the new course was not plotted on the ECDIS and the master failed to inform the OOW of the new chosen course so that it could be plotted on the paper chart.

The OOW, in turn, did not ask the master why he was diverting from the planned route or his intentions for passing through the upcoming sandbanks.

The master would later tell investigators that he changed the vessel’s course because he believed the ship would be crossing the sandbank at high water.

Bridge Resource Management (BRM) is a safety protocol that requires the input of each member of a ship’s bridge team during all phases of navigation – both when the master is on and off the bridge – to identify and break any potential error chains in order to prevent dangerous situations arising. Core BRM principles – including effective communication, assertiveness and leadership, and obtaining and maintaining situational awareness – are all required by the STCW Code for certification as a navigation watch officer.

The navigation procedures set out by Stellar Banner’s management company – Polaris Shipping Co. Ltd – did not include guidance regarding the use of BRM by members of the ship’s bridge team when the master had the conn. The investigation report affirms that this guidance is essential for BRM to be effective because an OOW, or any other navigation watch officer, must be able to question a master’s decision without it being considered any kind of attempt to undermine the master’s authority.

In response to the report, Polaris Shipping says it has revised its SMS (Safety Management System) procedures, and that all ships in its fleet will now undergo a remote third-party navigation and engine room audit twice a year.

It will also fit 11 closed-circuit television cameras on the bridge and in the engine room of each of its ships, which will be monitored daily by a third-party.

All 20 crew members were evacuated uninjured from the VLOC. The ship itself had cost an estimated $100m to build in 2016 and insurers estimate wreck removal costs will run to a similar amount. The scuttling operation was closely monitored by several environmental agencies, and the Brazilian Navy says it is continuing to observe the area of the sinking for evidence of any oil or other material stains that may appear on the surface.

In March 2017, the VLOC, Stellar Daisy – also operated by Polaris Shipping – was lost after sinking in the South Atlantic 1,300nm off the Uruguayan coast. Two crew members were eventually rescued from a life raft, but the bodies of the other 22 crew were never found. The survivors reported hearing a loud bang before the ship started to list heavily and quickly before sinking. Read more about the Stellar Daisy here.

Tweet
Published in Troublespot
More in this category: « Shearwater: What caused towing failure off Cape Wrath? The dangers of onboard vehicle fires »
back to top