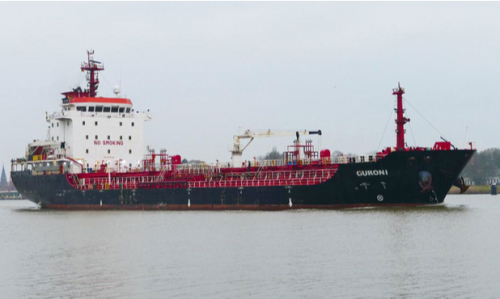 A catastrophic engine failure during heavy weather in the North Sea highlights the consequences of overlooking repeated warnings from a vital safety device. Keith Ray looks into the 2019 Guroni tanker incident.

Guroni, a 6,190grt oil and chemical tanker built in 2010, was on its way from the port of Klaksvík in the Faroe Islands to Rostock in Germany in ballast. The vessel was due to stop at Skagen in Denmark to take fuel on board.

On 5 January 2019, a junior engineer removed one of the main engine’s lubricating oil filters for cleaning. Once the cleaning was complete, he reinstated it.

During the evening of 7 January, the oil mist detector sounded an alarm. The oil-mist detector samples the air from the different crankcase compartments of the engine and triggers an alarm should the oil mist exceed a specified level.

Excessive oil mist can occur if parts of the engine are becoming too hot, or if there is a fire within the engine. On investigation, the crew found that the air filter of the oil-mist detector was dirty. The filter was cleaned and throughout the rest of the day no alarm sounded. It was assumed to be a false alarm.

However, at 0742 on 8 January, the vessel was being navigated through the Skagerrak when another oil-mist detector alarm was heard, together with a lubricating oil low-pressure alarm.

The crew again assumed these were false alarms and reset the detector. However the lubricating oil low-pressure alarm was not investigated and was also dismissed as an error.

At around 1100 on 8 January, the engine speed was reduced because of heavy seas, and the vessel’s speed dropped to 4.5kn. During the afternoon, the oil-mist detector alarm sounded twice more, but on each occasion it was simply reset as it was assumed these too were false alarms.

Errors with oil-mist detectors were a known issue at the time, with problems plaguing them since their introduction. This likely contributed to the alarms being dismissed as errors and not properly investigated.

However, things then took a turn for the worse. At 1634 the second engineer, while making a routine inspection of the steering gear area of the vessel, noticed an abnormal change in the sound of the engine.

On entering the engine room, he noticed the engine had stopped and there was significant smoke in the area. The chief engineer was called; together they determined that the crankcase covers were not excessively hot and concluded that there was no fire. They opened the engine-room skylight to allow the smoke to disperse.

At 1645 the chief engineer informed the master that attempts to restart the engine had failed. With the heavy seas – and the proximity of land – the master ordered the anchors to be deployed at 1706. Once anchored, the crew removed the crankcase covers to investigate further. Their inspection revealed extensive damage. Loose and missing bolts holding the rocker arms were tightened or replaced, but the engine refused to start.

It was also discovered that the oil filter, which had been removed for cleaning on 5 January, had not been replaced correctly. While the engine had three oil filters, the most important one was at the outlet from the oil pump. This was the filter that had been improperly re-mounted, resulting in inadequate filtration and possibly restricted oil flow to the engine.

An investigation by the Transport Malta Marine Safety Investigation Unit (the ship sailed under the Maltese flag) found that all the crew were experienced and that there were no problems with working hours, drugs or alcohol.

It was suggested that, with the heavy seas, the crew may have been tired or stressed, and that this might have compromised the crew’s effective monitoring of conditions in the engine room.

But the main concern was the repeated assumption of false alarms from the oil-mist detector. It is now known that the alarms were almost certainly real, and that the oil mist was the result of components in the engine becoming overheated due to oil starvation caused, in turn, by the faulty replacement of the oil filter.

The fact that the alarm remained silent for quite a long time after being reset may have given the crew a false sense of security.

The recommendations from the safety investigation report stress the importance of having a safety management system manual that addresses the critical importance of the oil-mist detector and the procedures to be followed in the case of an alarm.

The incident also serves as a cautionary tale of repeatedly ignoring warning alarms, no matter how innocuous they may seem.

Read the full findings of the official investigation in the attached report below.