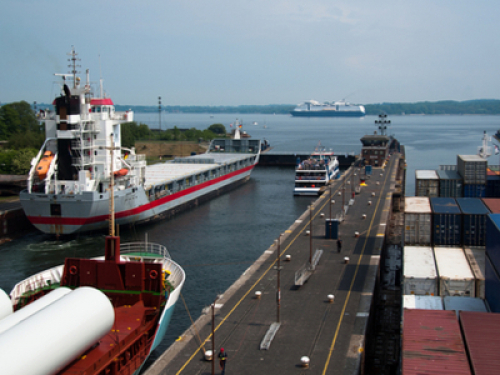 A report by Germany’s Federal Bureau of Maritime Casualty Investigation looked into the allision of the container ship Akacia with a lock gate on the Kiel Canal after the vessel sped up unexpectedly and uncontrollably. The question was – why?

On 19 February 2018, the Portuguese-flagged container ship Akacia was en route from Bremerhaven to St Petersburg and preparing to enter the Neue Südschleuse lock at midnight in order to exit the Kiel Canal.

The bridge was sufficiently manned for the manoeuvre and a pilot was onboard to advise the master, while a canal helmsman steered the ship. The pilot and helmsmen were familiar with the ship as it is a type that often transits the canal.

After a prescribed astern manoeuvre using the controllable pitch propeller (CPP) system, the Akacia would be put on a course for entry into the lock. CPP systems allow a ship’s speed or direction to be altered by adjusting the pitch of the propeller blades while the main engine keeps a constant speed.

The pilot was about to report the astern manoeuvre to the lockmaster when he noticed that the ship’s speed was increasing. His visual impression was confirmed by the display of the speed on the radar unit. He checked the display for the actual pitch, which was now set to 100% in the direction ahead.

Alarm sounds as speed picks up

The pilot pointed out to the master that something was wrong and advised him that the speed of the ship was increasing, beyond 7 knots. A continuous audible alarm was then heard on the bridge.

The master tried, unsuccessfully, to cancel the given pitch by setting the control lever back to astern. He then pressed the button to enable the backup control. Although the illuminated push button indicated it was enabled, the master could not adjust the pitch using the ‘Pitch Astern’ push button, which was intended for that purpose.

The speed of the ship continued to increase. The pilot called the lockmaster on VHF to notify him that they had a problem. As the master’s efforts to regain control of the CPP system were unsuccessful, the pilot suggested to the master that they drop both anchors quickly. However, this action – along with a main engine emergency stop – failed to lead to any significant reduction in the ship’s speed.

The lock gate was hit by the 149m, 11,000 grt, vessel at high speed. The Akacia’s fore section broke through the gate and its bow sustained heavy damage in the process.

After, crew members were sent to the fore section to check the extent of the damage. The bow thruster room was filled with water, and the forepeak was also slowly filling.

Lines were deployed on both sides of the ship to stabilise the Akacia’s position. It was later pulled out of the dock and towed to a berth.

The damaged lock gate had to be dismantled and removed, and a replacement gate installed. There was, thankfully, no loss of life or any injuries, and no water pollution.

Accident investigators arrived at the ship the next morning.

The Akacia was visited several times by the investigation team who carried out enquiries from a number of perspectives and completed a series of interviews with the crew.

Information from an analysis of the ship’s S-VDR G4 simplified voyage data recorder (VDR) was gathered, but the recordings did not contain any information about the rate of speed selected on the CPP system or the pitch of the propeller blades.

The vessel was eventually moved to a dry dock in Hamburg for survey, which revealed damage sustained to the propeller blades and inside the propeller hub, caused by earlier contact with an unknown solid object at an unknown time.

Fragments created by the damage had travelled through the CPP system's hydraulics, and one of the fragments had blocked the proportional valve – a mechanism that would have been needed to adjust the pitch of the propellers at the moment the entire system failed.

The investigation team concluded that whilst in the proportional valve, the fragment had caused the piston to be locked in the position ‘adjustment of pitch in the direction ahead’.

As a result, the hydraulic oil flow could not be interrupted when the position required by the pilot was reached – causing the propeller blades to adjust to a maximum 110% position in the direction ahead.

The report points out that the crew could never have predicted the event and would not have been able to identify it.

They had, understandably, been surprised when the accident happened.

Having said that, the investigators say they assume the crew did not switch to emergency operation – although switching over to the engine room would not have changed things.

The investigators believe that the eventual removal of the blockage happened by chance, possibly in connection with the high oil pressure in the system, which resulted in the fragment being flushed out a short time afterwards.

The Akacia is now back in service.

Tweet
Published in Troublespot
More in this category: « Dangers of ignoring alarms What caused Pacific fishing vessels to collide? »
back to top