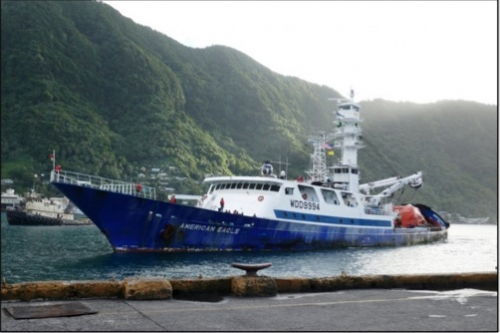 In the vast Pacific Ocean, two fishing vessels found themselves racing towards the same school of tuna – but resentment between the crews led to a radio silence standoff that contributed to a multi-million dollar collision.

The fishing vessels that work out of Pago Pago in American Samoa cooperate in a ‘code group’, exchanging information over VHF radio about catch sizes and likely locations, as they ply the Pacific Ocean, just north of the Equator.

Over the next two weeks, the ships would fish for tuna in close proximity, making their way eastwards as they followed reports of better fishing.

Senior officers on each of the two US-registered vessels included a foreign-licensed fishmaster who was responsible for directing the vessel whilst underway towards fishing locations and while actively fishing. The fishmasters communicated with each other over VHF radio in Portuguese – a language not spoken or understood by the captains of the Koorale or American Eagle.

The ‘code group’ rules include a protocol whereby a vessel first to a school of fish and in position to set its nets is given priority to harvest that school.

However, this informal agreement began to break down between the Koorale and American Eagle when both ships spotted and started to pursue the same school of fish. The fishmasters spoke over the VHF radio to determine who would have the right to fish. The American Eagle fishmaster later told investigators that his counterpart on the other vessel “just started yelling”, while the Koorale’s fishmaster reported that his counterpart “insulted me”.

Two days later, on the afternoon of 17 June 2019, the spotter in the Koorale’s tuna tower sighted another large school and radioed his ship’s fishmaster who was on the bridge navigating the ship and monitoring the sonar. The fishmaster turned the Koorale to starboard, towards the fish, and put the engine full ahead. Moments later, the spotter and fishmaster both saw the American Eagle ­– six miles away – change course and head for the same school of tuna. The Koorale’s fishmaster estimated that the school was four miles closer to his vessel, so he gave an order to “stand-by” to deploy the net. 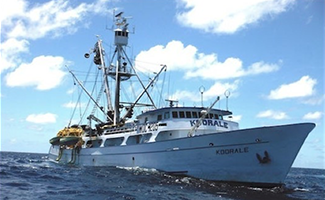 A few minutes later, the school “went down” and could no longer be seen.

The Koorale’s fishmaster slowed to 8 kt and used sonar to detect the school 200m off his starboard bow. He considered his ship to be “in the spot”.

Meanwhile, the American Eagle’s fishmaster had also seen the school go down, but saw it resurface shortly afterwards on his vessel’s port side – telling the captain to turn the ship towards the school and to speed up to 14 kt.

Aboard the Koorale, the fishmaster, now seeing that a collision was imminent, steered his vessel hard to starboard and moved away from the port operating station to escape the impact. The captain stepped up to man the centre console, checking the rudder to confirm that the vessel was hard to starboard, then sounding the vessel’s horn and putting the throttle controls to full astern.

At 1704, the American Eagle and Koorale collided – with the bow of the larger American Eagle crushing the port side of the smaller Koorale’s wheelhouse. The drama was captured on CCTV, and can be seen on YouTube.

The Koorale’s captain used VHF Channel 16 to hail the American Eagle, and he asked if everyone was okay. It was the only communication the two vessels had with each other on that day.

Neither of the vessels was found to be taking on water, and both of them were able to return to port unassisted and under their own power.

The accident investigation report by the US National Transportation Safety Board (NTSB) determined that the probable cause of the collision was that both captains and fishmasters did not follow international collision regulations or communicate to make arrangements while pursuing the school of fish.

The vessels were in a crossing situation, and the American Eagle, having the Koorale on its starboard side, should have given way (Rule 15). The American Eagle did not alter course or speed to avoid the collision, and neither vessel acted until it was too late.

As the vessels raced to the same school and toward each other, no attempts were made to communicate. Both fishmasters explained that this was due to the yelling and insults between them over the VHF radio two days earlier.

Neither captain stepped in to communicate because of the unofficial hierarchy on board the vessel, where the fishmasters directed the vessel while fishing.

The accident investigation report concluded, therefore, that had the captains and fishmasters followed the international collision regulations or communicated to make arrangements, a collision could have been avoided.

The owners of the Koorale have filed a federal lawsuit in Florida seeking $20m in damages and economic harm from the owners of the American Eagle, who, in turn, are seeking to have the lawsuit dismissed.

For further details about the accident, go to NTSB website and search for accident ID DCA19FM039.

Tweet
Published in Troublespot
More in this category: « Akacia's lock gate allision Why did the MSC Zoe lose containers overboard? »
back to top