Combustible cargoes – how can we prevent them? 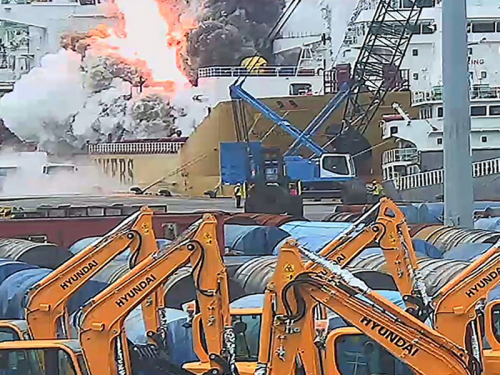 A life-threatening explosion which devastated the chemical tanker Stolt Groenland in South Korea has, yet again, highlighted the need for closer monitoring of cargo temperatures – and better training. How can more be prevented?

On 28 September 2019, the Cayman Islands-registered tanker Stolt Groenland moored alongside in the port of Ulsan, South Korea, loaded with 20 different chemical cargoes, including 5,000 tonnes of styrene monomer – a volatile hydrocarbon used in the manufacture of plastic and rubber products.

Hours later, two explosions ripped through the vessel and ignited a fireball that reached a road bridge running above the ship and blowing the gangway watchman over the main deck’s starboard guardrails into the water. Thankfully, the watchman managed to climb, injured, up onto the quayside while the rest of the crew took to the freefall lifeboat to abandon ship.

More than 700 emergency responders – using 117 appliances – were called in to fight the fire, with 15 eventually taken to hospital with injuries.

The explosions blew a large hole in Stolt Groenland’s main deck. A cargo access hatch cover was also blown off, while the deckhouse was completely burned out, and the accommodation block sustained extensive fire damage.

Heat and smoke also penetrated the bridge, damaging most of the equipment.

If the heat is not quickly removed, the temperature can initiate self-sustaining and extremely rapid polymerisation known as ‘runaway polymerisation’.

During this process, styrene monomer will start to expand, creating a build-up of pressure that forces vapour out through the tank’s vents or, in some cases, enough pressure to rupture the tank entirely.

To prevent polymerisation during storage and transportation at sea, an inhibitor has to be added. The most commonly used polymerisation inhibitor – 4-Tert-Butylcatechol (TBC) – is a solid that is often mixed with methanol to turn it into a liquid before being added to the cargo of styrene monomer.

However, according to an investigation report by the UK Marine Accident Investigation Branch (MAIB), on behalf of the Cayman Islands Government, the methods of adding and mixing TBC on board Stolt Groenland were “rudimentary”, relying heavily on the ship’s movement during the voyage.

MAIB investigators also discovered that a similar polymerisation incident had occurred just days before on Stolt Groenland’s sister ship, Stolt Focus. In that case, however, the heat generated by the polymerisation process was noticed before the critical runaway temperature was reached.

Initial efforts to stabilise the temperature, including the injection of additional inhibitor, were unsuccessful, but following consultation with Stolt Tankers’ onshore chemists, the crew distributed the cargo across four cargo tanks and mixed it with sea water, which successfully stabilised the styrene monomer.

The MAIB accident investigation report points out several factors that contributed to the Stolt Groenland explosions, including:

Chemical explosions aboard commercial vessels are, sadly, nothing new. A long catalogue of serious incidents includes the German container vessel MSC Flaminia which exploded in July 2012 – killing three crew in the middle of the Atlantic Ocean – due to the auto-polymerisation and ignition of its cargo of divinylbenzene, a chemical used to make plastic resins.

In March 2018, an explosion in the cargo hold of the Maersk Honam as it sailed through the Arabian Sea resulted in the death of five crewmembers. Investigators concluded that the tragedy was most likely caused by the overheating of 1,000 tonnes of sodium dichloroisocyanurate dihydrate – a powerful oxidiser widely used as a cleansing agent and disinfectant.

The world’s worst chemical explosion aboard a commercial ship occurred in 1947 when 2,100 tonnes of ammonium nitrate exploded on the converted Liberty ship SS Grandcamp while docked in Galveston, Texas – setting off a chain reaction of explosions across nearby facilities that killed 581 people.

Tweet
Published in Troublespot
Tagged under
More in this category: « Polar peril grounds Akademik Ioffe
back to top