Wanted: Your knowledge on biofouling 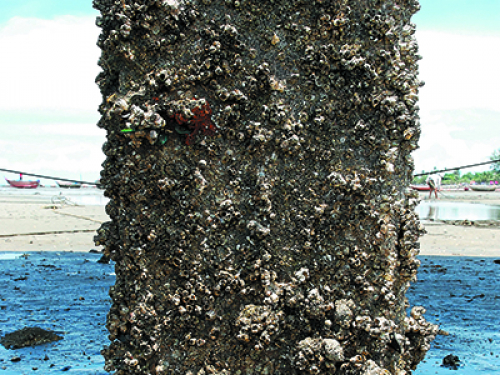 The Biofouling Management Special Interest Group (SIG) aims to discover more about lesser known invasive species causing problems around the world – and you can help.

These biofouling species, settling wherever they find a surface and able to survive the stresses of ship voyages for example, tend to be robust and opportunistic. They are able to alter the biodiversity and function of the very ecosystems they find themselves in.

There are economic consequences too.

They can clog seawater cooling systems for industrial plants or compete with farmed aquaculture species. But the biggest effect is on shipping, where the biofouling build-up on a ship’s hull affects its hydrodynamic performance, slowing the vessel down.

The shipping industry has made considerable financial investment to prevent biofouling, and there are now a variety of fouling control coatings on the market. Internal seawater systems can be fitted with mechanisms - often electrochemical - to stop growth obstructing seawater pipes and in-line equipment.

We need to know more

Yet there’s plenty we still don’t understand about biofouling and its impacts.

“To ascertain the true scale of the problem, we need to hear from everyone” John Lewis, SIG Chair

Improving our understanding of the range and distribution of alien species, as well as their environmental tolerances, could lead to better control measures.

There’s likely a whole host of unknowns – and the IMarEST Biofouling Management Special Interest Group (SIG) hopes to find out about them.

Send us your views

The SIG is running a survey with the aim of compiling a table of invasive species with the biggest impact on local marine ecosystems, as well as assessing their socio-economic implications.

“To ascertain the true scale of the problem, we need to hear from everyone – not just the scientists working on known species in known trouble spots,” SIG chair John Lewis told Marine Professional.

The input doesn’t have to be from peer-reviewed research publications. In fact, for the purposes of this exercise, it’s probably better if it’s not. The SIG’s intention is to cast the net as widely as possible.

“It might be a throwaway remark you overheard at a conference, or through an interaction with a regulatory body, a mention in local news report, even direct observation or encounter,” suggested Lewis.

The SIG wants to hear from every area of the world, particularly non-English speaking parts – areas where localised bio-invasions might go largely unnoticed or unrecorded.

Take part in the biofouling survey

If you want to contribute to the Biofouling Management SIG’s survey, email:  mentioning ‘Biofouling Big Three’ in the subject line.

Read this article in full in the next print issue of Marine Professional, out later this month.

Tweet
Published in Interactions
Tagged under
More in this category: « Gwynne Lewis: “We need to build a resilient future after COVID” Gender bias: Why diversity matters »
back to top