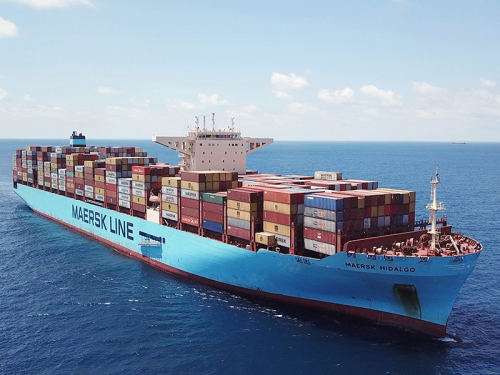 Global shipping companies have started to invest heavily in methanol-powered vessels and supporting infrastructure – but is it the best new fuel to improve their emissions and profits?

In an effort to accelerate its ambition to become a net-zero CO2 emissions operation by 2050, the world's largest container shipping firm, Maersk, has just announced it will bring the first of eight, brand new methanol-powered ocean-going container vessels into service in the first half of 2024.

Currently under construction at Hyundai Heavy Industries (HHI) in South Korea, the new ships will each have a nominal capacity of 16,000 TEU and feature a specially designed methanol propulsion configuration developed in collaboration with MAN ES, Hyundai Himsen and Alfa Laval.

The agreement with HHI includes an option to build four additional ships in 2025. Business analysts estimate that each ship will cost around $175m, making Maersk’s total investment in the project’s first stage at least $1.4bn.

“Once they are all out there sailing on green methanol, these new ships will save a million tons of CO2 every year,” promised Morten Bo Christiansen, Maersk's head of decarbonisation.

As a fuel, methanol offers a number of clear benefits for the shipping sector, which, in light of the climate crisis, is under continuing and urgent pressure from regulators and customers to significantly reduce its emissions.

Methanol produces no sulphur and very low levels of nitrogen oxide. And, due to its liquid state, existing storage, distribution and bunkering infrastructure is able to handle it with only minor modification required – making it an economically attractive competitor to liquefied natural gas (LNG).

In recent years, methanol has also tended to be less expensive, on an energy equivalent basis, than other competing fuels such as marine gas oil.

Importantly, from an environmental point of view, methanol biodegrades rapidly and dissolves readily in water, helping to reduce pollution problems that might arise after any possible large spills.

However, sourcing adequate amounts of methanol is likely to be challenging, requiring global production to be ramped up significantly.

REintegrate, a subsidiary of the Danish renewable energy company European Energy, will work with Maersk to establish a new facility capable of producing the 10,000 tonnes of methanol needed annually to power each of the ships. The REintegrate facility will use renewable energy and biogenic CO2 to produce green e-methanol identical to fossil methanol, with full production expected to start by 2023.

Maersk is also investing in the Californian start-up WasteFuel to build bio-refineries that will produce fuel from waste that would otherwise degrade and release methane, and other harmful emissions, into the atmosphere.

Busily developing other projects around the world, WasteFuel has also now entered a similar partnership with the world’s largest private jet firm, NetJets.

Several other shipping companies are also gambling that methanol will prove to be the most effective alternative marine fuel in the near future.

Tanker company Proman Stena Bulk, for instance, says it has ordered two methanol-powered vessels to be entered into service in 2022. And earlier this year, Singapore-based Eastern Pacific Shipping (EPS) joined forces with MAN Energy Solutions to help develop methanol as a marine fuel.

“Converting our existing conventional fleet to burn methanol creates a unique opportunity to continue lowering our carbon footprint significantly and rapidly,” explained EPS’ CEO, Cyril Ducau. “We’re excited about the next steps in developing this technology and sharing our findings with the wider industry.”

Tweet
Published in On the radar
Tagged under
More in this category: « China masters the MASS sector Can hybrid reef technology save the coasts? »
back to top