Can hybrid reef technology save the coasts? 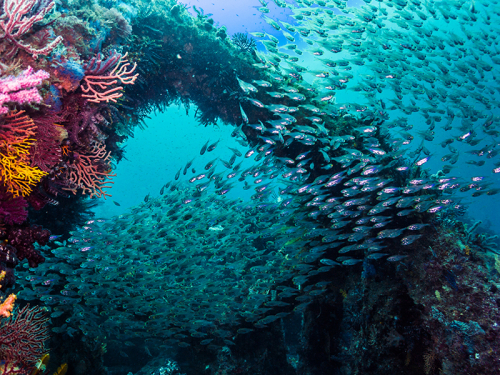 A US defence-led project plans to blend technology, engineering, and hydrodynamic innovation to create artificial reefs that would normally require decades of biological structure-building – in a matter of months to years.

Now the US military is looking to create hybrid, part natural, partly engineered reefs that are quick to grow, inexpensive, self-maintaining, and more effective than anything to date.

Darpa (Defense Advanced Research Projects Agency), the research agency run by America’s Department of Defense, has set up the five-year Reefense project to create hybrid reefs as a coastal defence suited to the changing environment.

Reefense has a particular emphasis on protecting the country’s coast and the 1,700 Department of Defense managed military installations in coastal areas worldwide – which existing protective measures are not managing effectively.

Described as a “self-healing, hybrid biological and engineered reef-mimicking structure to mitigate coastal flooding as seas rise due to climate change” Reefense brings together recent innovations in materials science, hydrodynamic modelling, and adaptive biology to develop growing structures suited to a changing environment, including the acidification of warming and rising seas.

One further advantage is that rather than blocking waves, as a sea wall does for example, a reef slows them, dispersing energy before they reach land.

“These structures will help significantly reduce infrastructure maintenance costs, promote ecosystem health, and strengthen DOD (the US Department of Defense) ability to maintain its infrastructure and military readiness.

“We see a great potential for the Reefense program and performer teams to collaborate with other government and non-governmental organizations that have interest in coastal protection and improved ecosystem health,” added Adornato.

The challenge, of course, is to ensure that hybrid reefs are future-proofed to thrive through climate change.

Reefense is a 5-year programme which will be split into three main stages. The first is looking at the materials which will provide wave attenuation and promote the growth of marine life; the second stage will look to reef building organisms to protect the reef; and the third will focus on adaptive biology for coral and oysters for long-term resilience.

The project is currently assessing proposals from interested contractors and hopes to move to the next stage by 2022. The plan is to eventually progress to testing the concept on the US Gulf Coast and South Florida.

Tweet
Published in On the radar
Tagged under
More in this category: « Shipping’s billion-dollar methanol gamble Battle of the paddles versus propellers »
back to top