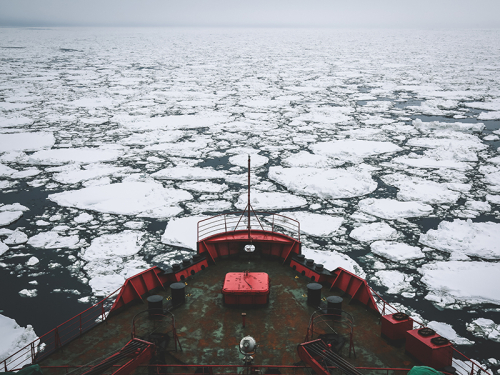 The Suez Canal debacle in March has emboldened Russia to accelerate its ambitious plans to open up the Northern Sea Route for year-round shipping.

Moscow has announced its intention to start year-round shipping through the Northern Sea Route – which passes through its Arctic territories – by 2023.

Known to be one of President Vladimir Putin's flagship projects, the Northern Sea Route is the shortest sea connection between the country’s European and Far Eastern regions.

Russia has already begun investing heavily in new maritime infrastructure to develop the route with the hope of turning it into a major global shipping lane now that the Arctic is warming up at a faster rate than the rest of the world.

The country began its massive US$163bn decade-long infrastructure programme in 2020, which will see the construction of new terminals and ports and speed up the production and transport of LNG, oil, and minerals. Other projects will aim to establish and promote shipbuilding and Arctic tourism.

Putin has also ordered the construction of a fleet of at least eight new Leader-class nuclear-powered icebreakers, along with 13 new powerful ice-class hydrographic ships and around 16 specialist support and rescue ships.

Currently, the Northern Sea Route is only open to shipping for nine to ten months a year, with 33m tonnes of cargo shipped through it in 2020. However, Putin wants to see 80m tonnes of cargo passing through by 2024.

Around 60% of freight traffic through the route is made up of LNG and condensed gas, according to Russia’s Federal Agency for Maritime Transport, which adds that just over 1,000 permits for navigation were issued in the first nine months of 2021 – up 15.3% year-on-year – including 144 permits issued to foreign-flagged vessels.

Now, though, in light of the huge blow to global trade caused earlier this year after the 400m (1,300ft) container ship Ever Given – which became stuck fast diagonally in the Suez Canal for six days due to high winds and a dust storm – Moscow has decided to speed up its ambitious polar plans.

He added that all of the new icebreakers would now be in operation by 2026.

The commercial imperative is reportedly being spearheaded by Russia’s biggest oil and gas firms, Novatek and Gazprom, mineral extraction companies such as Rosneft, and the state-run nuclear company Rosatom.

Rosatom – which was founded by President Putin in 2007 – also intends to deploy the first Arctic container vessels on the Northern Sea Route by 2025, having recently ordered a fleet of new 6,000 TEU ice-class vessels.

Putin, meanwhile, says he welcomes interest in the Northern Sea Route from economic rivals, such as India and China, as well as other Asian and European countries.

"It is important that we observe the activities of countries that have concerns about Russia developing the Northern Sea Route,” he said. “There are suggestions that we will restrict them, but we’re not going to restrict anyone.

“The more that the Northern Sea Route is used by all countries, the better.”

Tweet
Published in On the radar
Tagged under
More in this category: « Deepest concerns over sea mining A 'Littoral' failure for the US Navy »
back to top