The Race to Zero for New Fuels and Propulsion Technology 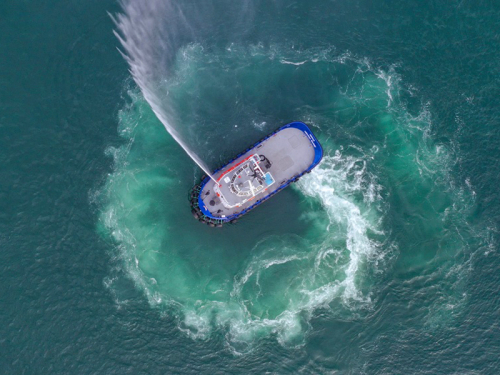 The maritime sector’s urgent reassessment of the way it engages with the environment, to help combat climate change, is now well underway, with new technological initiatives coming thick and fast from all parts of the industry.

Leading harbour logistics specialist Svitzer has, for instance, just started construction on, what it claims, will be the world’s first fuel cell tugboat.

Due to enter commercial operation in 2024 and developed with Canadian naval architects Robert Allan Ltd and Svitzer’s parent company Maersk, the 25m (82ft) TRAnsverse Tug will run on carbon-neutral green methanol – a design the consortium hopes will prove scalable for ocean-going vessels.

“The TRAnsverse Tug is a game changer that will allow us to gain hands-on experience in how we deploy fuel cells as an alternative to diesel or pure electric power,” insists Svitzer COO, Ingrid Uppelschoten Snelderwaard.

“It will also pave the way for future tug designs and help ease the transition from the fossil fuels the marine industry uses today to the future carbon neutral fuels that the sector must transition towards over the coming years.”

Svitzer has also now started converting its fleet of 10 River Thames tugs to operate on biofuel – a move that, it says, will reduce CO2 emissions by 90%.

Five of the tugs have been running on hydrotreated vegetable oil (HVO) since the start of November 2021, while the rest will begin using HVO in early 2022.

Designed by Navtek Naval Technologies, the ZEETUG, is equipped with lithium-ion battery packs that use quick-charge stations to fully charge the 18m (61ft) vessel within one hour to have it fully ready for an entire heavy-duty shift – eliminating nine tonnes of NOx and 210 tonnes of CO2 per year.

Navtek says ZEETUG technology can also be easily adapted to fit all types of short-distance watercraft, such as ferries, fishing boats and water taxis.

In December 2021, the Fastwater Consortium in Stockholm, Sweden, successfully demonstrated a pilot boat that it has converted to operate on methanol fuel.

“This is a project that clearly shows how methanol has now become a real and practical choice to help the industry urgently reduce its pollution in ports and coastal shipping,” says Fastwater coordinator Sebastian Verhelst.

Clean technology has also become a mandated obligation of all of the teams competing in the upcoming America’s Cup, who must now operate two hydrogen-powered foiling chase boats, at least 10m (98ft) long, for their campaigns.

The race organisers hope showcasing proven hydrogen technology in their high-profile events will help “create a game-changing pathway for the wider marine industry that will lead to a significant reduction in its carbon footprint”.

At COP26, green maritime specialist Artemis Technologies unveiled a model of the high-speed zero-emission workboat it will launch this year – the eFoiler.

Promising to reduce fuel consumption by up to 90% compared to traditional ferries, while still capable of carrying up to 350 passengers, the design of the eFoiler incorporates proven technologies from yacht racing, motorsport and aerospace by integrating a high-power electric drivetrain into autonomously controlled high-aspect ratio hydrofoils that will lift the vessel out of the water, reducing the disturbances caused to wildlife, fish and shorelines often caused by the motion of conventional high-speed commercial vessels.

In November 2021, the world's first electric and self-propelled container ship, Yara Birkeland, finally set sail on its maiden sea voyage to the Norwegian fjords where its new work pattern will help eliminate 1,000 tonnes of CO2 by replacing more than 40,000 cargo trips by diesel-powered trucks each year.

“We have been looking forward to this day for a long time,” says Svein Tore Holsether, CEO of the vessel’s owner, Norwegian chemical company Yara.

“Yara Birkeland will transport mineral fertilizer between two of our terminals and contribute to significant emission cuts during transport. It is an excellent example of green transition in practice, and we hope this ship will be the start of a new type of emission-free container vessel. Many places in the world with congested roads would benefit from a high-tech marine solution such as this.

“We will now begin a two-year testing period of the technology, which will see Yara Birkeland finally certified as an autonomous all-electric container ship.”

Tweet
Published in On the radar
More in this category: « Five of the best of 2021 Registering AI that’s safe »
back to top