Somalia: all quiet on the East African piracy front 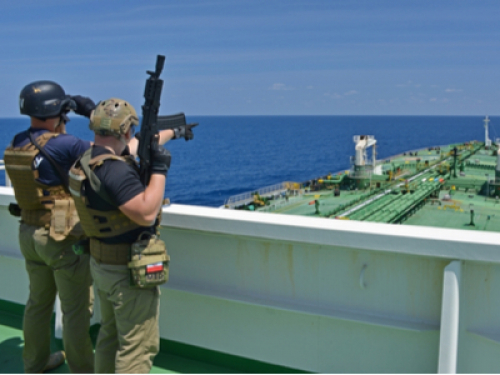 Once a dangerous and persistent problem for shipping, Charlie Bartlett looks at whether piracy in the Gulf of Aden has had its day as the political landscape changes, armed guards professionalise, and operators take a data-driven approach.

Not so long ago, it seemed there was a pirate attack in the Gulf of Aden every day. Somalis were seafarers, generally fishermen displaced by foreign trawlers illegally depleting their waters.

Now, they had struck upon the biggest profit margins in maritime. The outlay: a skiff, a sun-bleached Kalashnikov or RPG-7, a rusty hook-ladder, and a mouthful of khat. The potential prize: unimaginable wealth; western wealth.

So, what has changed? After all, Somalia’s people are still crushingly poor, and vessels still sail by with containers full of Gucci bags and iPhones. Yet piracy has all but dissipated.

In 2011, the International Maritime Bureau (IMB) recorded 260 attacks in the Gulf of Aden; in 2020, only one credible instance.

“What is fascinating about the Stolt Apal case [in May, off Yemen] is that the market knee-jerked, because there were shots fired,” explains Munro Anderson, Partner at Dryad Global, referring to the six men who approached the vessel in skiffs last month, and exchanged fire with embarked guards. “But if you dig down, there is no indication that was a piratical attack.

“Thus far, we’ve got nine reported incidents, and those are suspicious approaches. Four incidents have involved shots fired. Two of those have nothing to do with piracy – one was a Saudi naval vessel destroying a remote-controlled IED. The argument that PMSCs [private maritime security companies] and insurance companies pursue is that there is a persistent piracy risk in the Indian Ocean, but the data does not bear that out.”

It is unlikely that naval activity in the region will be maintained, prompting fears of a resurgence in East African piracy. EU’s Operation Atalanta has populated the Indian Ocean with warships since 2012 but comes up for review this year. Anderson suspects that it is unlikely to be renewed. But various factors have changed piracy’s risk-reward equation, he says, not just the presence of navies.

“Piracy should be seen as the manifestation of an unstable political environment onshore. In 2011 Somalia was a failed state – but it can no longer be viewed that way. We are seeing the first democratic elections there since 1969, with a viable opposition. We’re also seeing an unprecedented level of humanitarian aid – five million people are still dependent on this. Although they had an 11% drop in GDP in the first quarter of 2020, which is in line with elsewhere in the world, thanks to coronavirus.”

Hans Tino Hansen, CEO of RiskIntelligence, agrees. “[There is] an improved situation on land, where businesses have been able to open and where local investors can place their money. This has created, over time, a somewhat better environment that may lead local investors to invest in legal activities – or other illegal activities for that matter -- and for jobless or displaced people to be less desperate than 10-15 years ago. In other words, the risk-reward ratio changed over time.”

Rise in the use of mercenaries

Since 2011, one of the biggest practical changes is armed guards, riding along with ships in the Gulf of Aden. This was not always so familiar as today -- initially, shipowners were reticent to put mercenaries on their vessels.

The profession had a shady reputation. Personnel were ex-military and reassuringly battle-hardened; but shortcuts were taken with weapons and equipment. Some guards found themselves on deck holding ancient bolt-action rifles, compared to the pirates’ post-war, high-tech Kalashnikovs.

This culture culminated in the case of AdvanFort which allegedly involved one of its crews in an illegal bunkering operation in India, in 2013.

When Indian police boarded the patrol vessel Seaman Guard Ohio, they found, not unexpectedly, a sizeable gun cache. The 35 men were promptly arrested for illegal bunkering and weapon smuggling, and spent the next five years in prison, receiving neither wages nor legal fees from their employer.

Only with pro bono legal assistance from the International Transport Workers Federation (ITF) were they finally released in 2017. At the time, ITF seafarers section chair David Heindel described the situation as a “glaring injustice”.

In 2015, BIMCO introduced a new type of contract, Guardcon, designed to discourage ‘cowboys’ and establish a sensible framework for shipboard security forces. “While there are a number of well-established, professional and highly reputable maritime security firms in operation, there are also many that are less well-founded and who may be operating with inadequate insurance cover and without the necessary permits and licences,” it said at the time.

“There has been an incredible drive toward professionalism brought about by consolidation in the market by the bigger players,” says Anderson. “In the gold rush days, you would see British special forces on vessels, and five years later you would see a Royal Marines chief heading up a team of four Sri-Lankans.

There’s certainly a market for western European military experience, favoured by the energy majors – but broadly speaking armed guard crews are taken from developing nations, which has led to a reduction in price.

Shift to a data-led approach

In fact, armed guards bring risks of their own. Aside from the discomfort tanker owners might feel at having bullets flying around, political worries abound too. “Last summer, in the Gulf of Oman, a knee-jerk reaction by shipping companies was to put unarmed security advisers on vessels.

“Dryad Global were quick off the mark in saying that we absolutely do not recommend taking unarmed advisers to the Persian Gulf, which Iran sees as its territory. Any use of foreign military personnel would be seen as very antagonistic to a country with a history of interdicting vessels on the grounds of espionage. So, it increases the ship’s risk profile for little to no security return.”

The overwhelming impression, then, is that East African piracy has had its day. Even if a stepped-down military presence yields some additional risk, there is little chance that 2011 will return, as long as there is not a major reversal of fortunes onshore. “The international military presence is very low in the region and it is doubtful that it can be increased again as most navies are hard-pressed for assets,” Hansen says. “The level of piracy is first and foremost governed by the situation inside Somalia, and if this situation deteriorates significantly in terms of security, economically, or both, there will be a potential increase in the risk of piracy.”

“I would be extremely surprised if Somalian piracy returned to anything like the 2011 level,” Anderson concludes. If we see a sudden halt to consolidation and economic growth in Somalia, we might see increased risk.”

Charlie Bartlett is a marine journalist and views are his own.

Tweet
Published in On the radar
More in this category: « Suez proves too costly for some as ships take long way round the Cape The Royal Navy: end of an era for gas turbines? »
back to top