Words / John Barnes US Lines’ United States (1952) remains the fastest passenger liner ever built. It has been reported she once reached 43 knots with her 240,000 shp machinery

The world’s fastest ever passenger liner and cargo ship both emanated from the USA. The United States and the SL-7 container ships both achieved their remarkable performances thanks to the development of powerful steam turbine machinery which made it possible.

By the 1930s, passenger liner speeds were reaching 30 knots and the largest vessels, such as the Queen Mary, Queen Elizabeth and Normandie, required around 200,000 shaft horsepower (shp) of steam turbine machinery to achieve this. The Queen Mary famously captured and held the Blue Riband for the fastest North Atlantic crossing for 14 years

In the USA, only two vessels had been fitted with such powerful machinery, the aircraft carriers Lexington and Saratoga, with 180,000 shp in a steam turbo-electric arrangement.

The aircraft carrier USS Lexington (1927) had turbo-electric power of 180,000 shp. This would not be exceeded in US Navy ships until the 1940s

Until World War Two, all US warships were far less powerful but the need for new vessels changed this.

Starting with the Essex-class carriers of 1940, geared steam turbines were chosen over turbo-electric. The design had eight Babcock and Wilcox boilers operating at 450°C supplying steam to four Westinghouse turbines connected to double-reduction gears. Output was 150,000 shp, giving a maximum speed of 33 knots. A total of 26 units of this class were built – a further eight were cancelled at the end of the war.

This set the pattern for the major US warships which followed, the Missouri class battleships and Midway class carriers. Systems were upgraded with the boilers operating at 600 psi and connecting to General Electric and Westinghouse steam turbines each rated at 50,000 shp for a cumulative 200,000 shp. During builder’s trials, 212,000 shp was developed in all four units of the Missouri class and the three Midway carriers, driving them all to speeds in excess of 33 knots.

Meanwhile the US Government, recognising the value of large, fast passenger liners as troopships in wartime, commissioned a design for a liner suitable for rapid conversion to a troopship, in conjunction with United States Line.

Following the trend with the US Navy ships, propulsion was by eight Babcock & Wilcox boilers operating at 1,000 psi (later reduced to 925 psi) and 524°C and four Westinghouse double-reduction geared steam turbines, producing in total 240,000 shp. This gave a service speed of 35 knots though she achieved 38.32 knots on trials.

However, a speed-length ratio of 1.4 would give a possible top speed of 44 knots, and certainly 43 knots has been claimed. These figures would make the United States far and away the world’s fastest ever passenger liner.

In 1952, on her maiden voyage, the liner took the east-bound Blue Riband from the Queen Mary at a speed of 35.59 knots, and 34.51 knots on her return west-bound. It is a figure that has only been broken by small, fast craft with a single passenger.

However, the development of commercial aviation across the Atlantic led to her being withdrawn from service in 1964 and attempts to bring her back into use all failed. She remains a sad reminder of the heyday of the transatlantic liner.

By the 1960s the container revolution was underway and as 1970 dawned, container shipping pioneer Malcom McLean and his Sea-Land Services company decided that speed would be a more important parameter rather than size or capacity.

He ordered a class of high-speed containerships, with eight vessels ordered from yards in Holland and Germany. The first, the Sea-Land McLean, was delivered in 1972 with the remainder following throughout 1973. 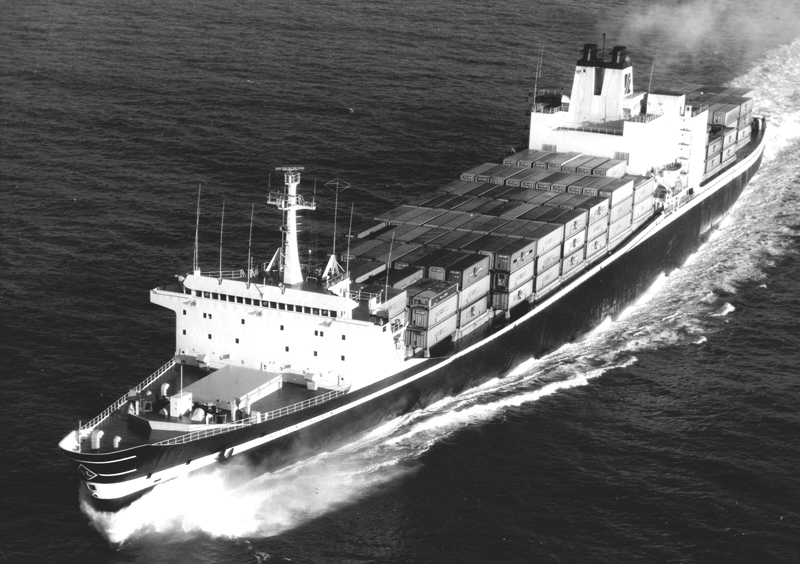 Lead ship of the SL-7 class of high-speed container ships was the Sea-Land McLean. Her 120,00 shp machinery produced a service speed of 33 knots, making her and her sisters the fastest ever cargo ships

The SL-7 class was designed to carry 2,192 TEU, a typical load for the day, but it was speed which set the class apart. Operating at the very high speed of 33 knots rather than the typical 26 knots was achieved with a propulsion plant that was half that of the United States and comprised two Foster-Wheeler boilers operating at 875 psi and 510°C. These fed steam to two GE turbines for an output of 120,000 shp to produce the highest ever cargo ship speed.

On the downside, this was achieved with a very high fuel consumption which, when fuel prices escalated in the mid 1970s, made them uneconomic to operate.

By 1982 all eight had been sold to the US Navy for conversion into Fast Sealift Ships, truly an end of an era. 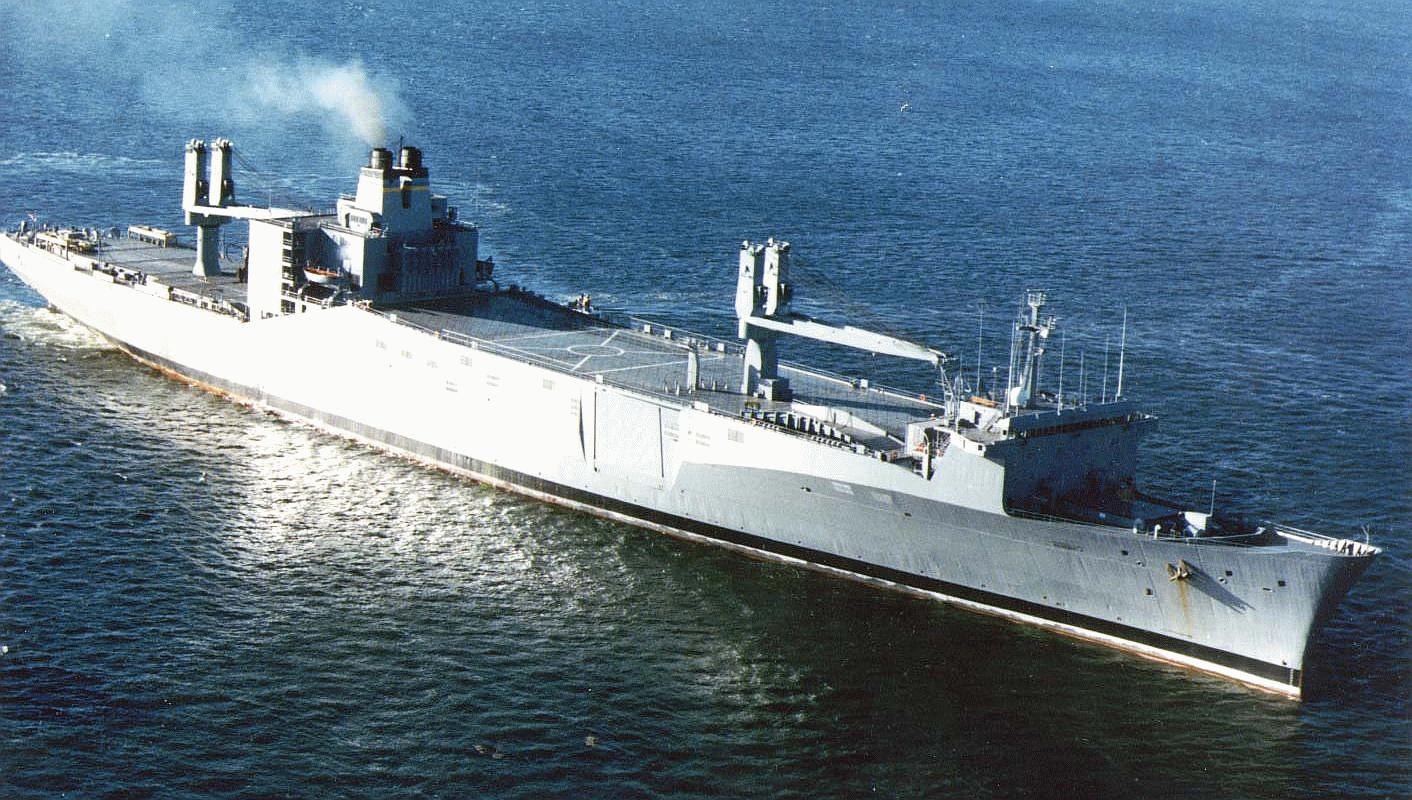 Once sold to the US Navy, the SL-7s became Fast Sealift Ships, arranged for roll-on/roll-off and lift-on/lift-off operations with on-board cranes and self-contained ramps capable of transporting heavy or bulky equipment such as tanks, large-wheeled vehicles and helicopters 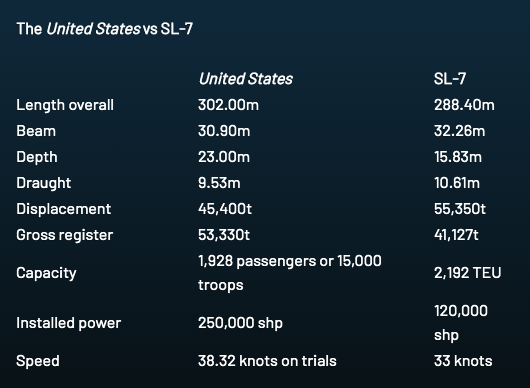 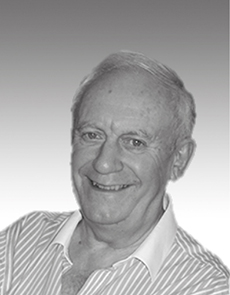 Tweet
Published in On the radar
More in this category: « IMO sets out better conditions for seafarers Navies’ crewless designs on the future »
back to top