Navies’ crewless designs on the future 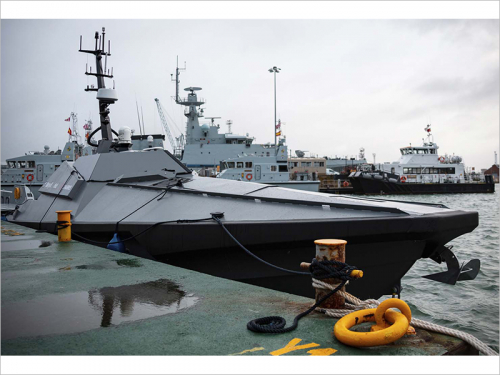 Rapid developments in artificial intelligence have convinced leading navies that unmanned surface vessels (USVs) must be at the heart of their future strategies. UK, US, China, Australia and Singapore are among the early adopters.

News that the Royal Navy has accepted a new autonomous vessel – Madfox, named after ‘Maritime Demonstrator For Operational eXperimentation – into its service highlights how navies around the world are beginning to commit to unmanned surface vessels (USVs) as key to future operations.

Madfox – based on the L3Harris Technologies 13m (41ft) MAST13 autonomous high-speed platform – will be fully developed by the Royal Navy’s experimentation and innovator agency, NavyX, having successfully passed extensive trials off Norway last year that saw it piloted remotely into and out of HMS Albion’s dock, with the remote operator, deep inside the ship, possessing full situational awareness via an array of on-board sensors.

“With Madfox now directly in our hands, we will be able to explore a multitude of issues such as safety, regulatory compliance, new missions, new payloads and the role that a USV can play in complex operations and within the future fleet,” explained NavyX team leader, Commander Antony Crabb.

“Later this year we’ll also be accepting an autonomous RIB (rigid inflatable boat) into our inventory. It’s exciting work that will help inform how unmanned systems are deployed from future Type 26 and Type 31 Class vessels.”

L3Harris Technologies has also been selected to design a USV for the US Defense Advanced Research Projects Agency (DARPA) – a partnership that will be central to the US Navy’s recently revealed intention to move towards a mixed fleet of crewed and un-crewed autonomous vessels.

The US Navy is setting up a new operational command dedicated to testing and developing its next generation of USVs – the Unmanned Surface Vessel Division One – which is currently trialling a destroyer off the coast of California in control of a range of unmanned vehicles, including Sea Hunter, a 40m (132ft) trimaran with a transoceanic range of 10,000nm and top speed of 27 knots, designed to track, lock-on to, and follow enemy submarines.

“Unmanned systems will be key in future operations – and there is a clear need to field affordable, lethal, scalable and connected capabilities,” explained US Navy chief of naval operations, Admiral Michael Gilday.

“That is why we are now expanding and developing a range of unmanned vehicles and surface vessels which will play a central role as we shift our focus toward smaller platforms operating in a more dispersed manner.

“A hybrid fleet will be necessary for the Navy to meet emerging security concerns. We need platforms to deliver lethal and non-lethal effects simultaneously in all domains across multiple axes,” added Admiral Michael Gilday.

Other countries leading the way in committing to their naval use of USVs include Australia, Turkey and Singapore.

The Royal Australian Navy’s has begun launching fleets of 6.8m (22ft) Bluebottle USVs. Powered by renewable energy sources, they are tasked to patrol and protect important national infrastructure assets, such as ports and oilrigs, and carry out anti-submarine tasks when required.

The Turkish Navy, meanwhile, has just unveiled its first USV – ULAQ – an 11m-long craft able to carry a two-tonne payload, including laser-guided missiles, which can cruise at 35 knots over a range of 215nm.

The Republic of Singapore Navy (RSN) has also just deployed four new 30-tonne USVs, which will conduct round-the-clock surveillance patrols to support security operations in the congested waters of the Singapore Strait.

The RSN says the 16.9m-long vessels – capable of 25 knots with 36 hours’ duration – will be equipped with lethal and non-lethal equipment including long-range acoustic devices, machine guns and laser dazzlers.

Intriguingly, a cloak of secrecy continues to surround the USV efforts of the Chinese People’s Liberation Army Navy (PLAN) – although private firms in China have now unveiled several USV platforms, including a RIB armed with machine guns and a catamaran armed with missiles and torpedoes.

PLAN is, though, known, to have developed an unmanned ship that western analysts say bears a remarkable resemblance to the US Navy’s Sea Hunter USV in almost every aspect – although it is said to be slightly longer and beamier.

Satellite imagery has been used to calculate its dimensions and track its visits back to the yard on the banks of the Yangtze River that built it.

See the US Navy's Sea Hunter USV in action here.

Tweet
Published in On the radar
Tagged under
More in this category: « America's remarkable record-breaking ships Icebreakers innovate in the face of climate change »
back to top