Special measures: We need to be alert to shipping security 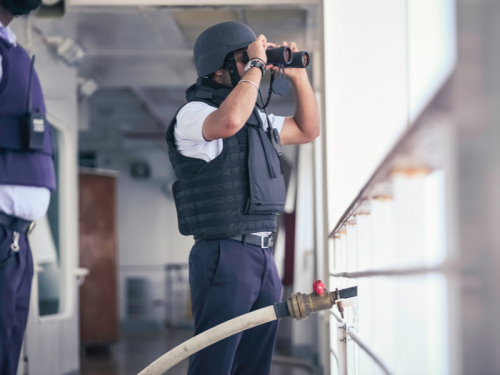 In the mid 2000s, Somalia, situated at the mouth of shipping’s biggest channel, the Gulf of Aden, was in a state of civil war. Its failed state had been unable to protect its waters from foreign trawlers which had illegally looted a huge number of fish from the region.

It was around this time that groups of capable but impoverished fishermen, who could no longer sustain their livelihoods, took to the waves once again with a much bigger catch in mind: massive ships, sailing lazily past their coast, carrying unthinkable wealth from Asia to Europe.

For a short time, theirs became one of the most successful business models in history. Overheads were minimal, desperate men were readily available, as was equipment – skiffs, grapnels or ladders, ever-present Kalashnikov variants, occasionally an RPG-7. There was nearly nothing to lose, and everything to gain, and it wasn’t long before foreign organised crime started to get involved, too; in 2013, it was estimated that piracy had become a $7bn industry.

Often weaponry was thrown overboard once a transit was completed to circumvent local regional laws. Poorly paid, poorly provisioned; one crew was completely abandoned after being jailed in India.

Since then, maritime industry governance has stepped in. IMO circulated MSC.1/Circ.1444 in 2012; BIMCO launched GUARDCON, a new contract which governed the conduct of Private Maritime Security Contractors (PMSCs); and in 2015, a new standard, ISO 28007, was launched.

There are now a large number of standards and accreditations for PMSCs, compliance with which has increased their standing significantly.

To help make sense of this, the International Chamber of Shipping (ICS) has launched the first edition of Maritime Security: A Comprehensive Guide for Shipowners, Seafarers and Administrations.

“In the years since, SOLAS and the ISPS Code set out the dedicated statutory framework for the issue, we have witnessed the emergence of a security culture in the industry with a growing awareness of security threats, and an understanding of the importance of following best practices to mitigate risks to seafarers and the global trade they sustain,” said ICS Secretary General, Guy Platten.

“Maritime security is a continual concern for the shipping industry, and security threats present real challenges to the entire global supply chain.

As security personnel and navies addressed the situation in the Gulf of Aden, pirate attacks diminished to nothing, leading to a general assumption that the problem has been dealt with. But vigilance is needed, as evidenced by a surge in piracy off the west coast of Africa, originating from the Gulf of Guinea. Here, where many of the local laws on carriage of firearms hamper PMSC operations, incidents of piracy are still going on.

There is not substantial reason to believe that the situation on shore in Somalia has dramatically improved. It may be that PMSCs in this region have become victims of their own success, with pirate attacks effectively eliminated; but few shipping companies are keen to be the first to test the waters by doing away with PMSCs entirely.

Tweet
Published in On the radar
Tagged under
More in this category: « Ten remarkable new marine species from 2020 Net effect of marine reserves »
back to top