Microsoft tests internet under the sea 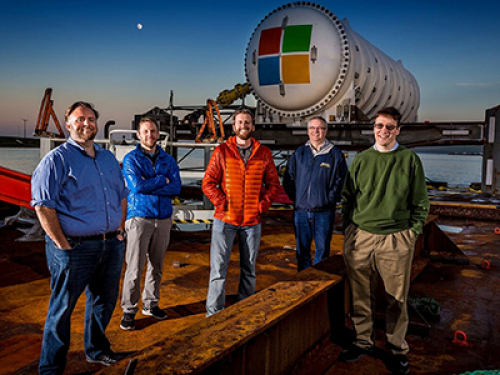 Borrowing ideas from submarines, Microsoft has just completed a two-year trial off the coast of Scotland to test the viability of storing data centres on the seabed.

June 2018, and what Microsoft was doing in the sea near the Orkney Islands off the north coast of Scotland, UK, was intriguing to say the least.

A team of its researchers used winches and cranes to submerge a container which housed racks of data servers which connect the internet to cloud storage 36m underwater onto the seafloor.

The cylinder-shaped container was part of Project Natick, Microsoft’s test and learn experiment run by its innovation arm, to explore the viability of storing data centres offshore in a way that could be better for the environment and more efficient. It followed an earlier trial in the Pacific.

The thinking behind the project is that consistently cool subsurface seas allow for energy-efficient data centre designs. For example, they can leverage heat-exchange plumbing such as that found on submarines.

Being able to put data centres underwater near coastal cities where around half the world’s population live means data would have a shorter distance to travel, leading to fast and smooth web surfing and streaming.

And housing data banks underwater in an air-tight, moisture-free container without the need for energy-heavy air conditioning, and with less seasonal temperature fluctuations, could improve reliability and be more sustainable. 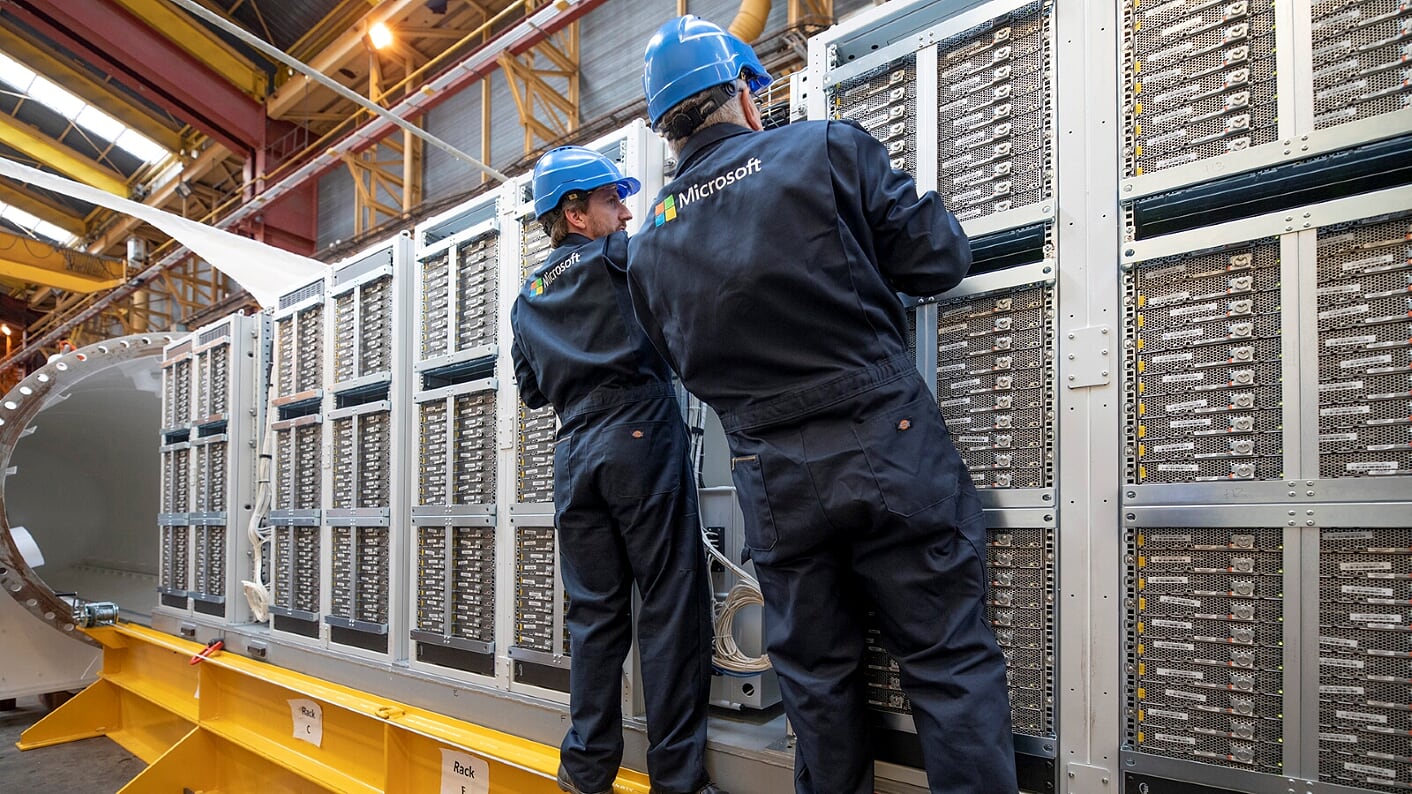 The thinking behind the project is that consistently cool subsurface seas allow for energy-efficient data centre designs. For example, they can leverage heat-exchange plumbing such as that found on submarines.

Powered by locally-produced renewable electricity from on-shore wind and solar, and off-shore tide and wave in the natural energy rich area around the Orkney Islands, the first challenge at deployment was to ensure there was no leak.  Any failure would be catastrophic at the outset as there would be no second chance to fix anything that went wrong.

At the deployment site, a cable containing fibre optic and power wiring was attached to the Microsoft data centre, and the data centre and cable were lowered 117 feet (36m) to the seafloor.

With four years’ research at stake, all went well. It was perhaps unsurprising given that it was one Microsoft employee’s experience serving on submarines that carry sophisticated equipment that first got the ball rolling on this project.

Fast forward to July 2020. Natick Northern Isles completed its two-year mission and was brought back to shore for analysis. Much of the data is still being worked on but Microsoft has already called it a success, and highlighted its:

While the wider Natick team is evaluating the results of the deployment off Scotland, Microsoft hopes Natick Northern Isles could be a step on the way to being able to deploy data centres at scale anywhere in the world within 90 days. But it’s also at the heart of Microsoft’s corporate vision to move towards zero emissions. 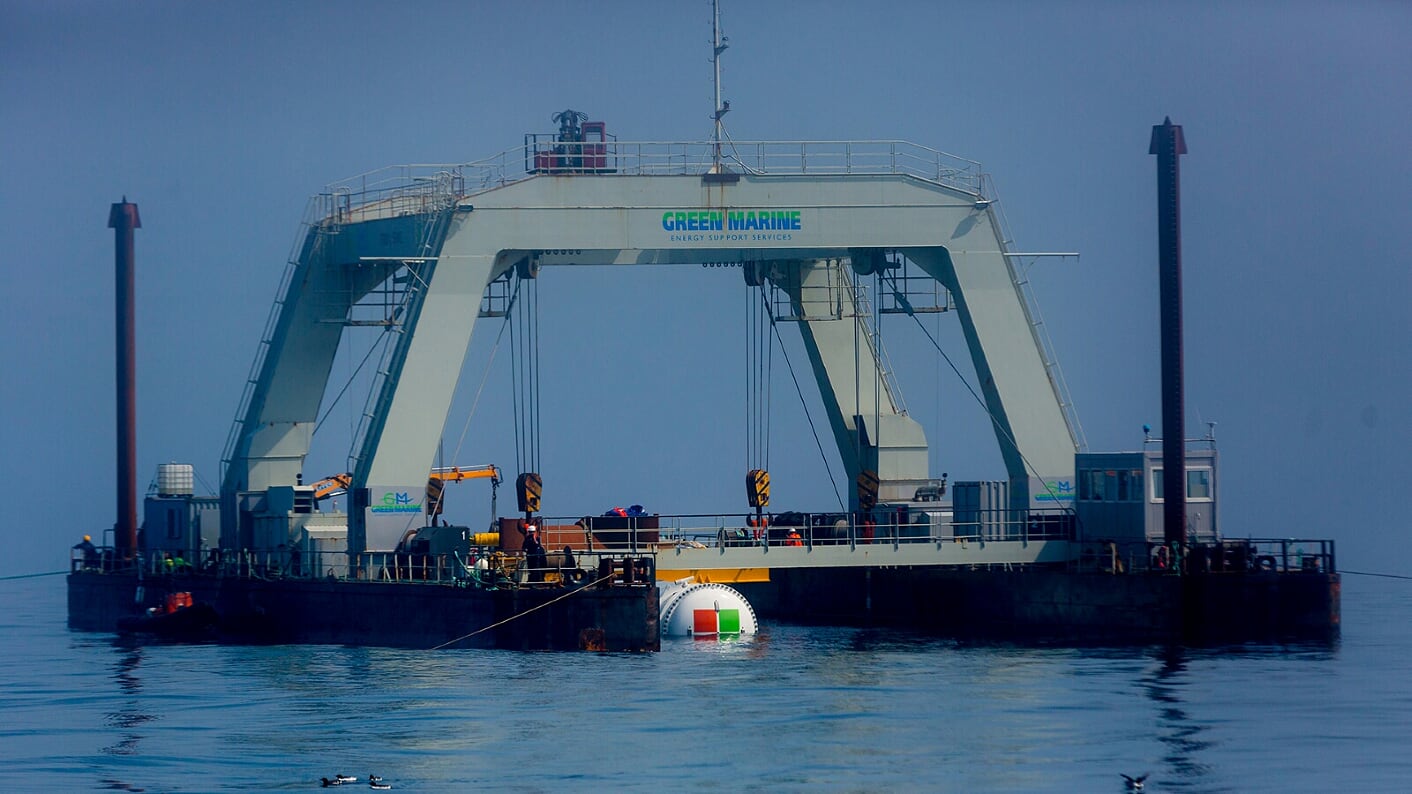 The data centre is partially submerged and cradled by winches and cranes between the pontoons of an industrial catamaran-like gantry barge. Photo: Scott Eklund/ Red Box Pictures

Yet some commentators have highlighted the underwater container’s ability to locally warm sea temperatures, asking what would happen if, eventually, there are hundreds – or more – of these on the ocean floor.

Ben Cutler told Marine Professional: “We share your concern for the environment and for that reason we conduct research (as we are doing now on Project Natick) to understand any impacts before making a decision to commercialise our work.

“We start with calculations and then work our way up to testing in the field (or in this case, the ocean) to confirm. Natick uses raw sea water for cooling, with the water returned to the ocean a fraction of a degree warmer.  Due to rapid mixing in ocean currents, the temperature impact just a few metres downstream of the data centre is undetectable; we would never deploy a data centre in water without good circulation.

“We used cameras on the exterior of the vessel to observe wildlife during deployment. We found that the data centre provided an attractive location for sea life and was quickly colonised by multiple species of fish and other sea life.”

We might not be seeing them everywhere soon, but it’s certainly an innovative approach – and one that could see more job opportunities emerge for those working in the marine sector.

Read more about Natick Northern Isles, or watch it here.

Tweet
Published in On the radar
More in this category: « Lost containers: a very solvable issue Ram bow revival that became the bulb »
back to top