Icebreakers innovate in the face of climate change 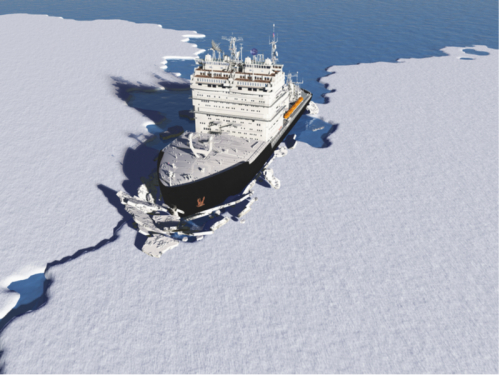 The climate crisis is prompting changes to the design and operation of icebreaking vessels, and Rotterdam has just sold its last one. Yet China and Russia go bigger – and nuclear.

Until the second half of the 20th century you could, in the middle of winter, walk confidently across the iced-up waters of the Port of Rotterdam. A fleet of four icebreakers had to be employed to keep the North Sea port open and operational.

Today, however, climate change has reduced that requirement to a single vessel – a 23m ship that hasn’t actually cleared any ice for almost a decade.

Built in 1963, RPA 20 was last used to break up sea ice way back in 2012. Equipped with a reinforced bow, its stern would be ballasted with water to make it drop down backwards, ensuring the propeller sat deeper and safer in the water, and allowing the ship to glide onto the ice to crush it with its weight.

Now, though, the Port of Rotterdam has decided that keeping a fully maintained icebreaker permanently on call is no longer viable and is about to sell RPA 20 off to a marine contractor specialising in dredging and salvage operations in Friesland, where it will join its sister vessel, RPA 24.

Rotterdam’s disposal of its last icebreaker is a pivotal moment within the icebreaking sector, as operators and designers begin to fundamentally reassess their approach to the discipline in the light of climate change.

In Russia, delivery of the world’s most powerful icebreaker, Arktika, has finally taken place – four years late and with the 173m vessel having missed out on its final ice trials because the builders couldn’t find ice thick enough to test it.

As tall as a 15-storey building, Arktika is powered by two nuclear reactors delivering a combined 175 megawatts of power – enough to propel it, theoretically, through the thickest Arctic ice.

“At just one metre thick the ice was just too thin and loose for Arktika to get any resistance,” explains Oleg Shchapin, head of the delivery team. “We tried to find an ice floe that was closer to three meters thick, but to no avail.”

Standing as tall as a 15-storey building, Arktika is powered by two nuclear reactors delivering a combined 175 megawatts of power – enough, its designers calculate, to propel it, theoretically, through the thickest Arctic ice.

A new vision for the future of icebreaking is, though, being spearheaded by Finland’s Aker Arctic, a world-leader in the design and engineering of ice-class and ice-breaking ships, which has recently revealed two new concepts.

The first is a 300m container ship equipped with an ice-strengthened hull and ice-breaking bow which, in thin ice or non-icy waters, sails bow-first, but which can also turn around to travel stern-first when it encounters thickly packed ice.

The second new concept is a self-propelled detachable icebreaking bow, Saimaa, that works in tandem with a pusher tug to break up ice up to 70cm thick, which has just successfully completed ice trials for Finland’s transport infrastructure agency. Watch a video of the Saimaa concept in action here.

In the meantime, the thinning ice fields of the Arctic Ocean are seeing more and more ice-class merchant ships sailing along the Northern Sea Route – once considered too dangerous and impassable to use commercially.

With the shipping distance from Shanghai to Hamburg 4,000 miles shorter via the Northern Sea Route than via the Suez Canal – and in light of the recent Ever Given debacle – it’s unsurprising that nations and corporations are now starting to eye the potential of Arctic shipping with much greater interest.

The world's largest container shipping firm, Maersk, began using the route three years ago. Last year, in the middle of winter, a Russian ship carrying LNG from Russia’s largest natural gas fields to China, made a return journey along the Northern Sea Route without any need for icebreaker assistance.

Despite increasingly evident and significant reductions in polar ice, Russia and China have decided to stick doggedly to long-established strategies to simply build larger and more powerful icebreakers.

The Russians have already started construction of three 209m Leader-class nuclear-powered icebreakers, scheduled to enter service in 2027, which will be able to plough through ice 4m thick at speeds of up to 22 knots.

The Chinese, meanwhile, recently launched their first domestically built polar icebreaker, and have given a green light to their state-run National Nuclear Corporation to begin building the country’s first nuclear-powered icebreaker.

Dennis O’Neill is a journalist specialising in maritime and a regular contributor to Marine Professional.

Tweet
Published in On the radar
Tagged under
More in this category: « Navies’ crewless designs on the future After Suez, shipping live cargo under scrutiny »
back to top